Time to get deep. 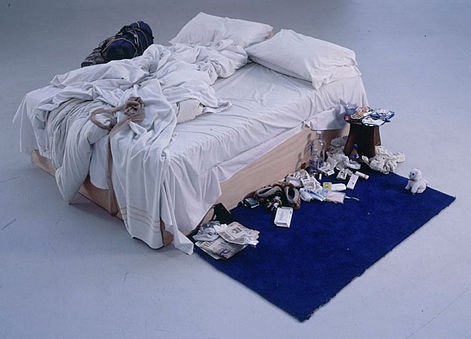 It’s very difficult for me to take this kind of art seriously. In fact calling such a thing “art” tastes bad in my mouth. Yet the art world is quick to remind us that art can be any form of self expression. Therefore I’m caught in an internal tug-of-war with whether or not to dismiss “My Bed” as a shameful aristic scam or to accept it as a legitimate form of self expression. Perhaps we as artists can benefit from revisiting the definition of “art”.

Oxford Dictionariies defines art as, "the expression or application of human creative skill and imagination, typically in a visual form such as painting or sculpture, producing works to be appreciated primarily for their beauty or emotional power." For the purpose of provoking thought and not to demean, according to this definition I would argue that "My Bed" - and other similarly bizarre pieces (though I don't agree with all in that list) - should not qualify as art based on these qualifications:

Ok, that's enough of me picking on Emin's piece. My point is to propose that art is a definable thing and it should be filtered to a degree. I understand this is a touchy subject. There's so much freedom in embracing art as a limitless category where anything and everything deserves the respect of the title. But let's not be naive to think that such a freedom cannot be abused.

I'm keen to hear the thoughts and feelings of this community. Please comment below to stir a respectful, mature discussion of the topic. Think about answering these questions:

1. Is there a line? Personally, I'm of the opinion that art should be filtered to an extent in order to maintain the meaning of "art". I support the similar philosophy of various dictionaries that outline extra-ordinary creative skill and imagination as requirements. If art isn't filtered and limited then the act of my pouring cereal this morning was a valid artistic expression of my hunger. Urinating is the valid artistic expression of a bladder needing relief. And on the scary end, murder is a valid expression of hatred toward another person - Quite the extreme example of self expression, though self-expression nonetheless.

There has to be a line, right? Otherwise it's like what Syndrome says in The Incredibles, substituting art for super: "When everything's art, nothing will be".

2. Where's the line? Hopefully based on the examples above we can agree that there should be a line. But figuring out where to draw that line is a whole different animal. This is where the Ocean of Subjectivity ebbs and flows with endless variety of opinion. For example, if Emin's "My Bed" was artistically crafted in order to send the message "rich people will buy anything" or "art has become a joke" then I might not only call it art, I might even applaud it! But was that the intention?

This brings up a pet peeve of mine and reveals where my line is drawn. I cringe whenever I hear an artist/musician/writer/etc avoid the question "what's the meaning behind your work" by answering with "it can be interpreted different ways by everyone." While that statement is fine and good, it not really an answer to the question. I believe an artist must be able to answer what it means to them, especially when they're willing to be interviewed. To not answer implies that they weren't motivated by an intention which severely handicaps the reason for it existing at all. But of course that's just my opinion. What's yours?

3. What does this mean for my artwork? Revisiting what is likely an age-old discussion about the nature of art should ultimately result in our maturation as artists. I know it challenges me in two specific ways.

First, the application of human creative skill. As a digital artist I am constantly reminded that I am not a master of my craft and I can always learn more, do better. If I'm ever satisfied with my skill level then something is wrong. The way golf is a game that can't be won, art is field that can't be perfected. There's something deeply intriguing about that.

Secondly, artistic imagination. In all honesty, my artistic journey has usually been more about skill than imagination. I can trace it back to my childhood when I wanted to draw my favorite baseball player; Batman diving off a building; the Titanic over and over (it was 1997 after all). Once I got into CG it was mostly about recreating my favorite characters from video games, or seeing a hundred awesome wolverine sculpts and wanting to do my own. Sure, I enjoyed learning so much from emulating the great artists abroad, but all of it was re-creative instead of creative. It's only been over the past 2 years that my artistic passion has evolved into a desire to skillfully say something with my own voice. That is what I believe to be the truest purpose of art and something worthwhile to strive toward.

Since this article was written, Prager University released a video regarding this topic: