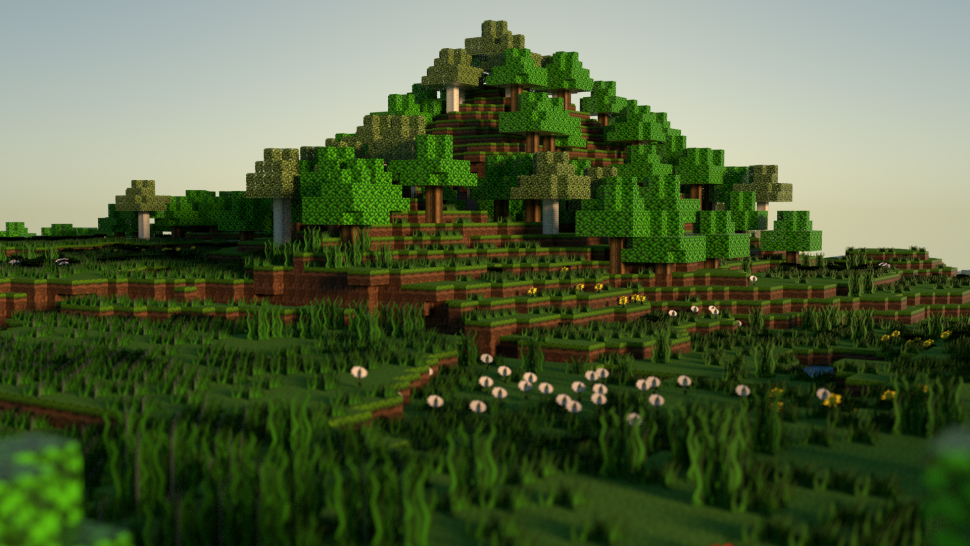 *Editor's note - this article by Ben Simonds was first published on CG Cookie blog in March 2015 and is back due to popular demand!*

Have you ever found yourself tackling a boring, repetitive Import-Export task in Blender and felt like you were manually re-entering the same data? I know how mind-numbing this can feel. And I know a way to make it much quicker and simpler...how? With a little help of Blender’s Python API and just a bit of code.

Who is this technique for?

I will demonstrate the technique using Minecraft worlds as an example, but it is incredibly useful for anyone dealing with a scenario that involves repetitive steps. In this specific case, we will be opening our Minecraft worlds in a standalone application first, to export them as objs. From there, we’ll bring them into Blender with the default obj importer, followed by using Python to tidy them up and get them ready for rendering.

What do you need to know before getting started?

If you’re completely new to Python, you might want to check out Bassam Kurdali’s Introduction to Python scripting for Blender Artists, Jonathan Williamson’s Task Automation with Python Scripting in Blender or even try out a couple of exercises on CodeAcademy.com. If you’ve experimented with the basics of Python in Blender but don't have much experience, then you should be able to follow along just fine. So let’s roll up our sleeves and get to grips with simple scripts!

Before we get started, we need to make sure we have some files to work with. Remember: I am using the Minecraft example to demonstrate this technique. If you’re a Minecraft player yourself and want to render your own world, follow along with this part. Note: If you’re just interested in learning some Python, you can skip to part “To Blender!” and use the demo files provided. The application I will be using to export world files from Minecraft to obj files is called Jmc2obj. It’s a free Java application that takes your Minecraft world as input, lets you define a region that you want to export with a simple overhead map view of your world and then exports an obj file including all of the textures needed. Sounds fun, right? The Jmc2obj wiki has an in-depth guide to using the application, but I’ll list the basic steps here. 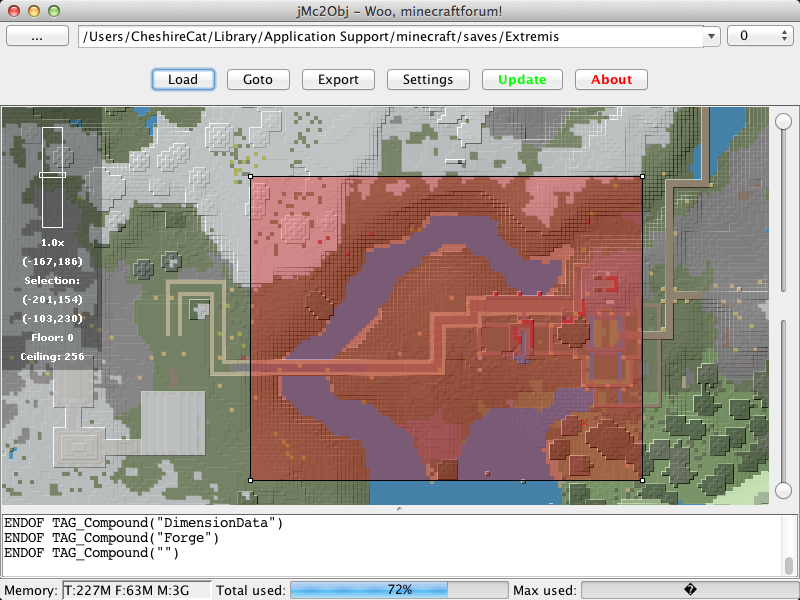 Whether you followed along or are starting at this step, you should have the inputs you need to head over to Blender. You should have an obj file and a corresponding mtl file (created by the exporter when you exported the obj), plus a “tex” folder containing all your block textures. Now it’s time to move to Blender and see how close this gets us to our final goal of a scene that’s ready to render in Cycles. Open up Blender and delete the default scene (keep the render set to Blender Internal for now), then use File > Import > Wavefront (Obj) Operator to bring in your Minecraft World. You’ll notice the importer has done a pretty good job already:Things are looking pretty good! Now, lets switch over to Cycles. 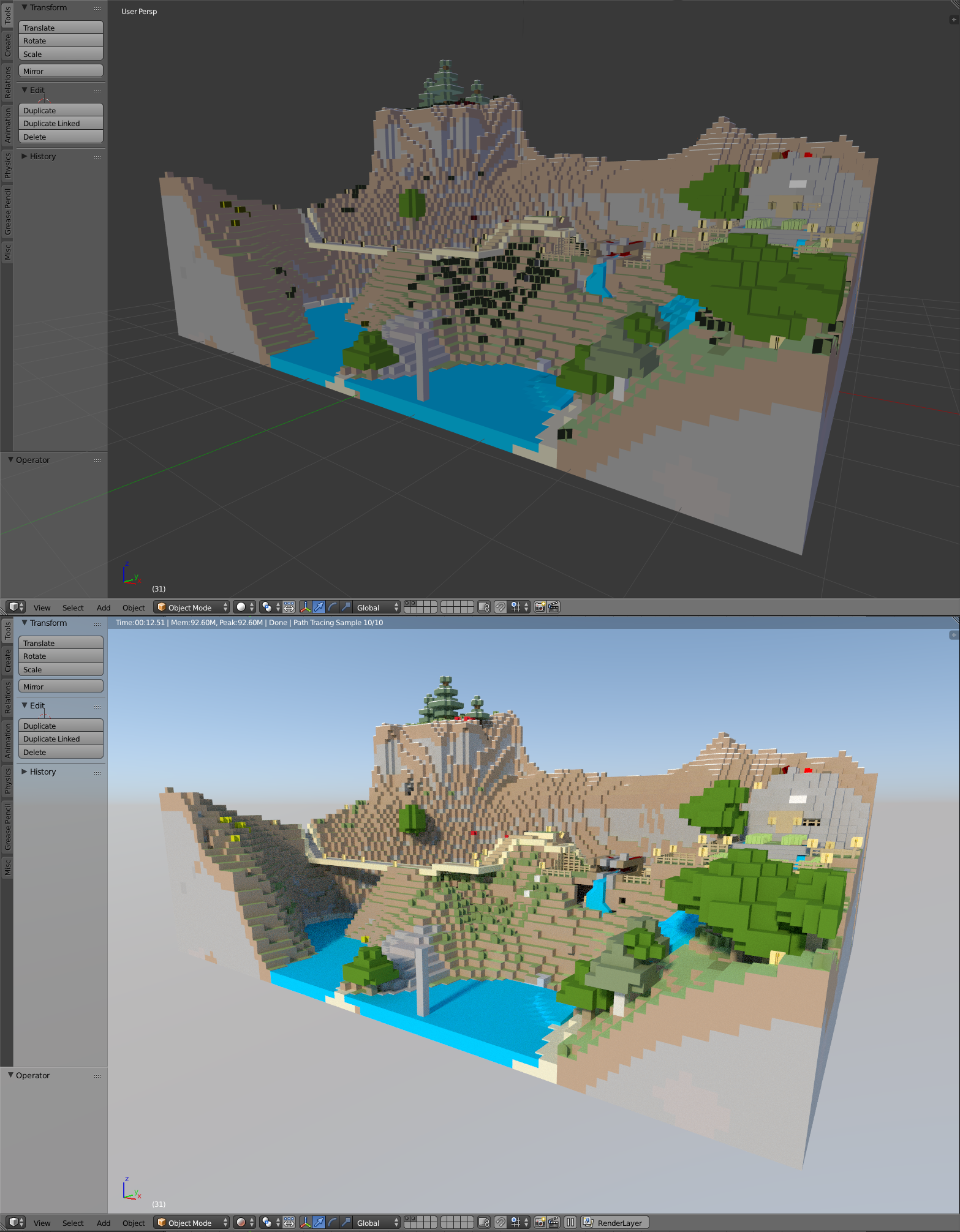 This, on the other hand, is not so great. In Cycles, we’ve just got some basic block colours for our blocks. Objects like torches and grass that require alpha maps to look “right” are in an even worse shape - our materials aren't set up at all for rendering in cycles. Here is where you may be thinking: “Oh no, I have a lot of tedious work ahead, creating a whole bunch of new materials.” But do you really?

Python to the Rescue

This is where Python comes in. Blender’s Python API is perfect for automating repetitive tasks just like this and with the information we already have it should be possible to write a script that does almost all the hard work for us. Let’s consider what we have already:

Let’s also consider what the requirements are for our final materials:

As you can see, most of our materials have pretty much the same requirements, so why not just start with the same basic shader for each material? Then, we can add the correct textures for the diffuse and alpha channels which should give us a pretty good start. In short, here is what we want our Python script to do:

And that’s it! We can then make our own tweaks later.

We have almost everything we need for our script already, but there are still a couple of things missing. First, it would be handy to have a simple way of defining a list of objects that need assigned materials. Why? In case there are non-Minecraft meshes in our scene (like lamps or cameras) the script won’t need to waste time on them. This can be accomplished pretty easily by assigning our Minecraft objects into a Group which we’ll call “Minecraft” for simplicity’s sake. We can then make our script only work on objects that belong to this group. Second, we need our template material. This is going to be used as the basis for all of our other materials so it needs to be both versatile and as simple as possible. Here’s how I laid it out.

The material uses the classic mix of Diffuse + Glossy shaders, blended with a layer weight node. The image texture node (which will later be assigned one of our many Minecraft texture images) is plugged into the Colour Node of the Diffuse Shader. For the transparent parts, we then mix the result with a transparent shader, according to the alpha value of our Image Texture node. Note that we can use this for all our materials; for ones with no transparency, the alpha will just default to white. For now, the Image node is left empty (hence the purple), but you can test the setup with some Minecraft textures to check whether it works. Naming tip: Because we’ll need to replace the Image used by the Image node, it helps to give it a name you can easily reference. I set the images name to “MC_Image” in the sidebar of the Node Editor and set the label to the same so that the node’s name is visible on the node itself too. What's next? This is a useful time to set up some basic lighting, a camera and anything else we might want to help us preview our scene as we work. I added a background shader with a sky texture node and a sun lamp for some simple outdoor daytime lighting.

Now that we have a basic scene set up, a template material and our minecraft objects grouped together, it’s time to write our script! Switch to the Scripting layout and create a new text data block for our Python script. Naming tip: Again, remember to give your script a practical name that will help you remember what it is. I named mine “MC_Obj_to_Cycles.py”. First, we import the obligatory bpy module:

Next, we can add in some useful variables that we’ll use repeatedly. We’ll comment our lines with # symbols to make our code easy to follow.

With those variables in place, we can start working through our list of objects, using a for loop function. A for loop takes an iterable (for example, our list of Minecraft objects), and runs the code within the loop for each item in that iterable. For our list of objects, this allows us to set up a copy of the template material unique to each object.

The try statement enables us to do some basic error handling. What does that mean? Whilst we expect our script to be complete and correct, if by some chance there’s an object in our Minecraft group that doesn’t have a corresponding image datablock named “object_name.png”, our script will throw up a KeyError. The except clause of the try statement lets us deal with that error by printing a notification of this problem to the terminal, skipping this object and moving on to the next one with the continue statement. Let’s move on. Note that we are still within the “for loop” as you can tell by the continued indentation:

That’s pretty much it (those last two lines are actually completely optional, but they help distinguish the end of the “for loop” for those following along). Hit Run Script to see the results (and check for bugs if it fails). 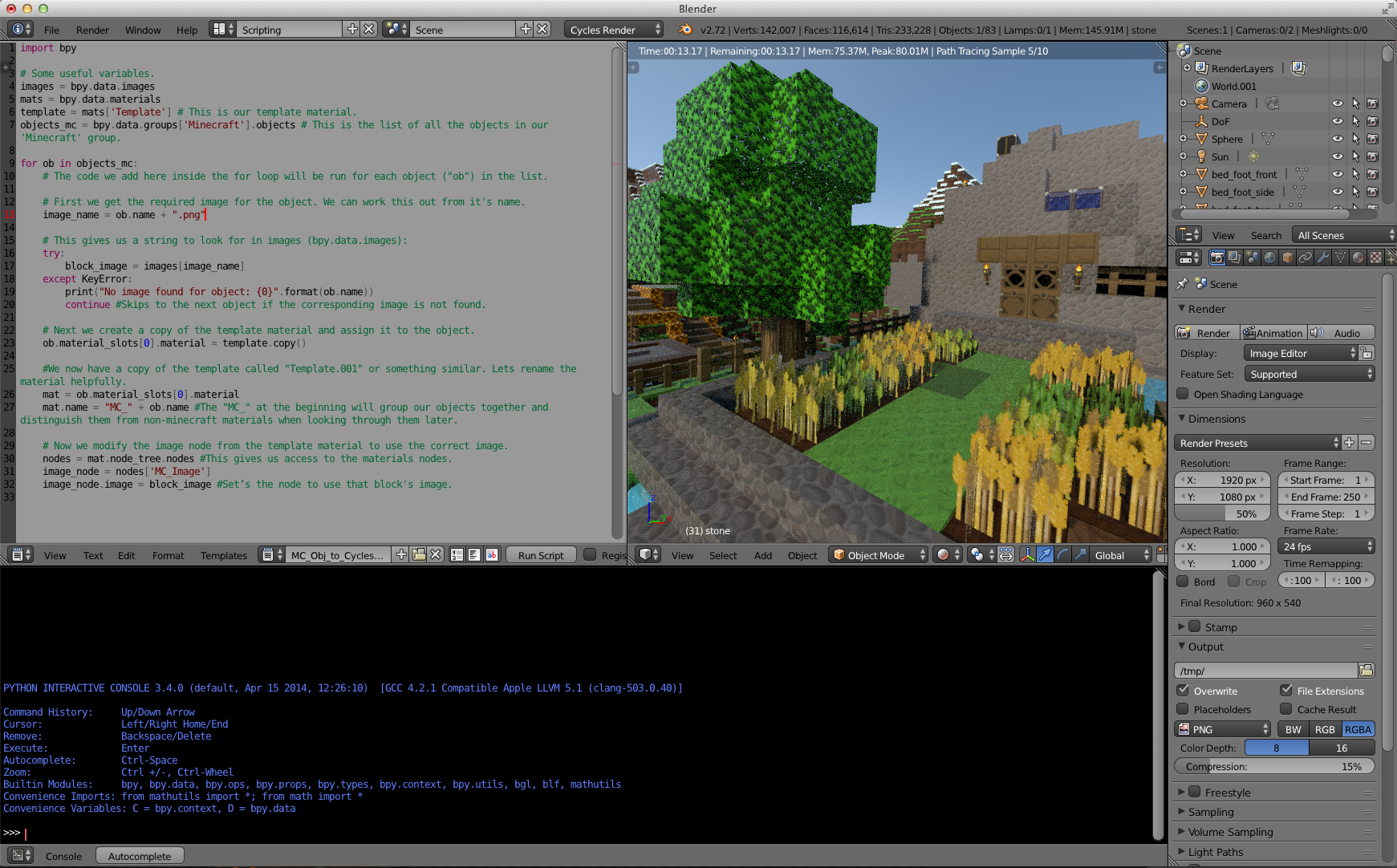 Here is the script again in its entirety:

You might notice that I’ve added in a couple of lines here as a final tweak to the script. If you have been following along, you know that when you run the script, the viewport colours of your objects switch to all grey. This isn’t particularly helpful when trying to distinguish a dirt block from a water block! To tackle this issue, I inserted the lines (with the comment “ADDED!”) to the script to preserve the original colour of the material. What specifically did I add?

Now that our Python script has done all the hard work of setting up a basic shader for all the materials we need, we can make a few changes to our scene and start finding some cool camera angles. I chose to switch the “MC_torch_flame” material to use an Emission shader in place of a Diffuse shader and added a refraction shader to the water materials (there are two shaders - one for still water and one for flowing). I’ll leave any other tweaks as an exercise for you, but here are some renders to get you thinking. 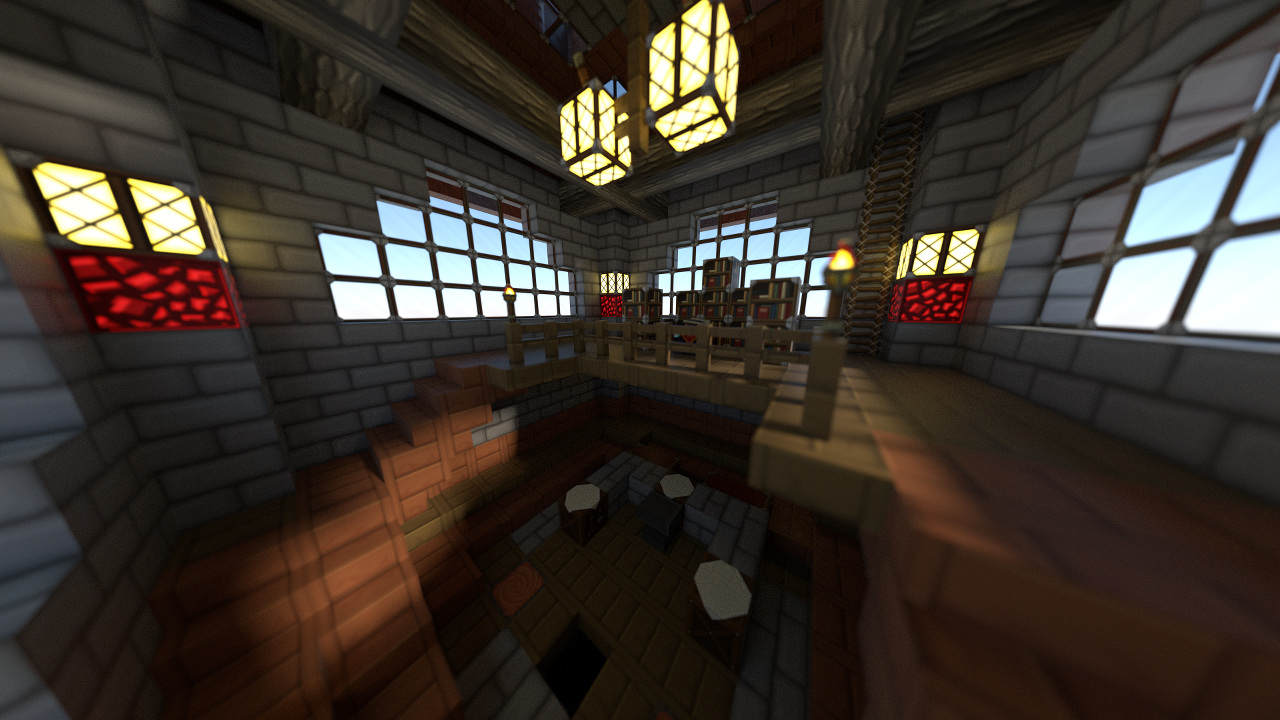 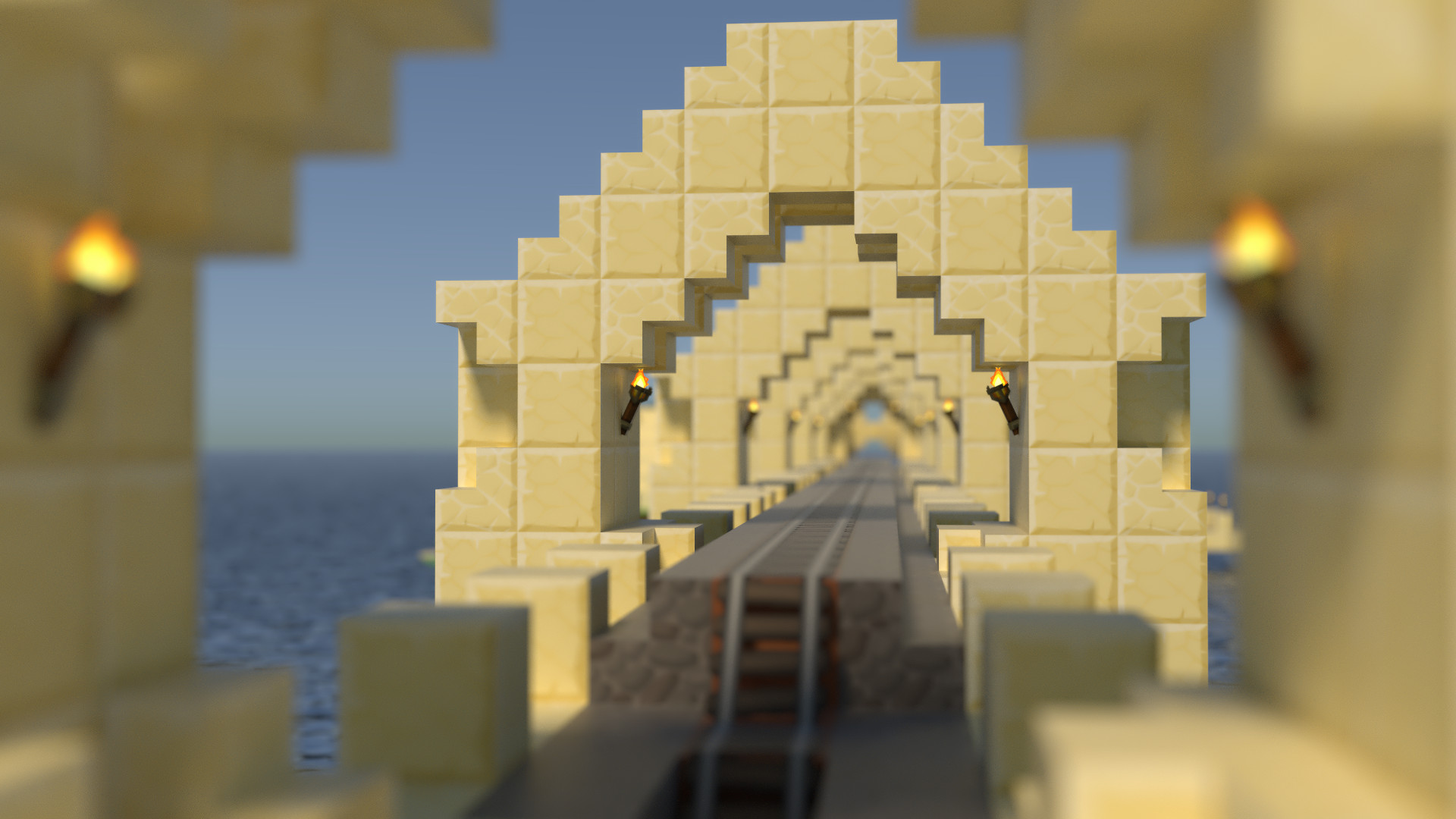 So what did we achieve? We started out with an obj file exported from our Minecraft world which came with lots of useful data (the names of our materials and images), but wasn’t set up for rendering in Cycles. With our Python script, we started with one basic template material and created a unique copy for each of the many materials in our scene, with the correct textures plugged into each one. Hopefully, this shows you how a bit of simple Python can make boring, repetitive tasks much quicker and allow you to get to the fun parts of creating an interesting render sooner. Remember: this technique doesn’t just apply to Minecraft renders. Anytime you’re working with a pipeline and have a creeping feeling that you could be using data to achieve a result in an automated way rather than manually, it’s likely Python is a good way to go.

Will you be giving this technique a try? Let us know in the comments.

As an extension, you might want to take the script a bit further. Here are some ideas:

Ben Simonds, is a Blender Artist based in the UK and the author of Blender Master Class. In the past he’s worked on ads, product visualisation and a couple of TV shows, all using Blender. You can find his personal work at  BenSimonds.com.