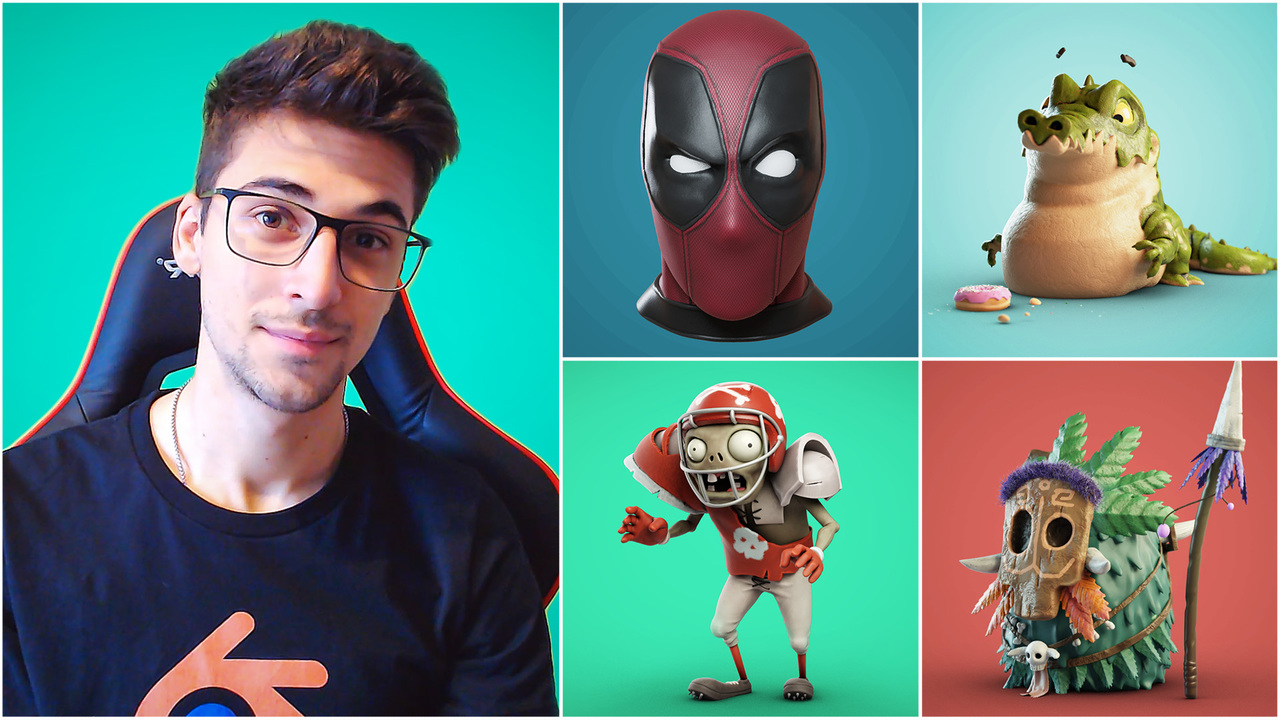 Your first portfolio piece was published this year. How long have you been learning 3d?

When I was 15 years old, my older brother showed me a 3D animation on YouTube. I found it really awesome and he told me that I could also do that and showed me Blender. I downloaded Blender as soon as he told me about it and started playing around with it. Since then, I dedicated almost all my free time to learning Blender. Tutorials, timelapses and experimenting by myself. Today I dedicate almost my whole day to Blender because not so long ago I set myself a clear goal.That's when I started putting together a portfolio, created my YouTube channel and set things in motion to accomplish my goal. 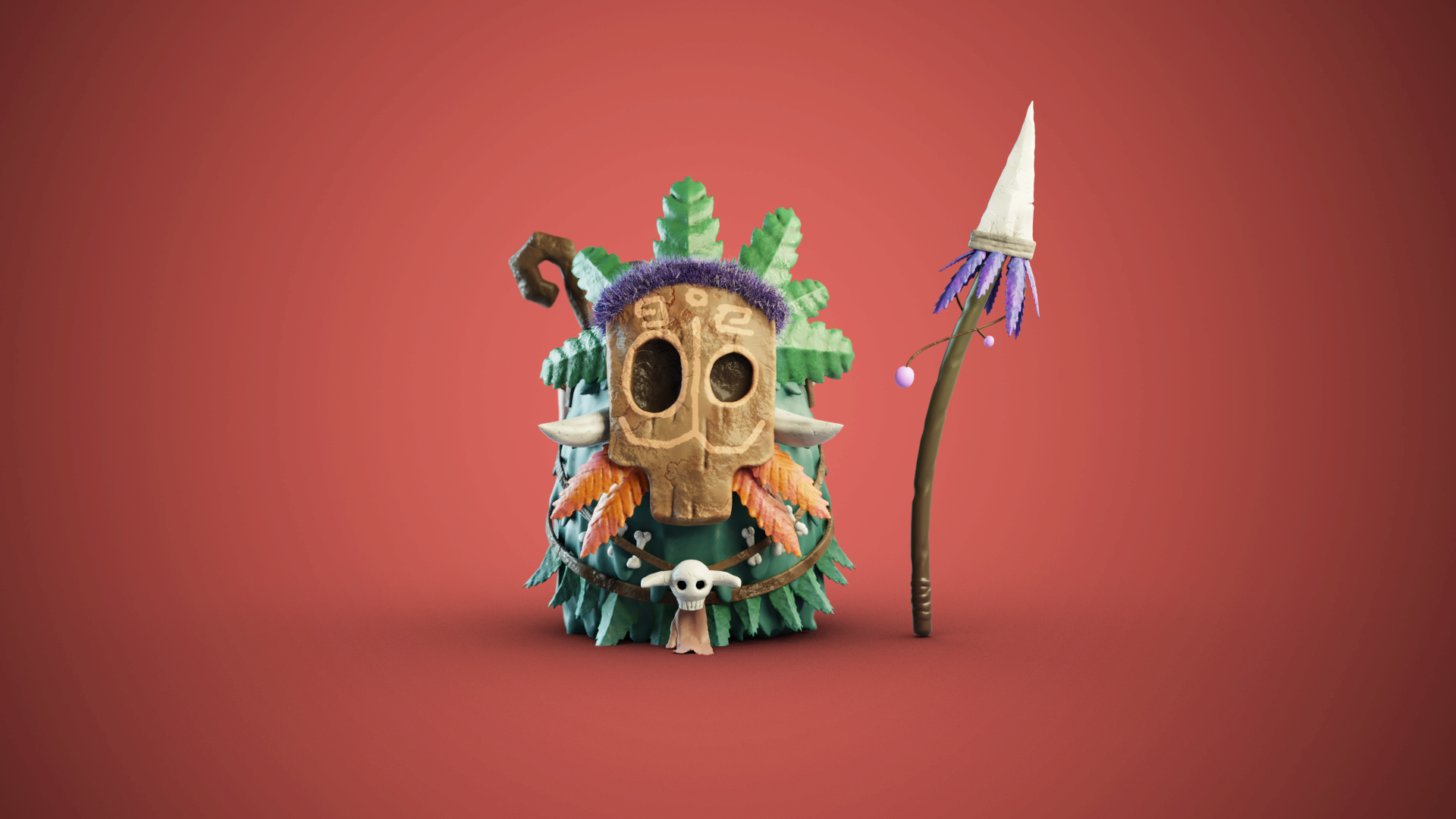 Did you do any traditional sculpting or illustration before starting with Blender?

I didn’t do any traditional sculpting or illustration. It all started with Blender, though around 1 year ago I got interested in digital painting. I took an online digital painting course in Portuguese taught by the instructor Guilherme Freitas. It was awesome.

That's when I realized how important other complementary skills are. For example, I’m not very good at drawing and I think that’s a big obstacle in my character creation process. I think it is not indispensable, but if I learned how to draw better, at least the basics, my workflow and sculpts would improve a lot. So definitely I will focus on drawing soon to complement my sculpts.

What inspires you to create such highly stylized and lovable characters?

I usually get inspired by a lot of stuff. Other people’s incredible work, a movie, a series, a game, people I admire, my girlfriend, my family, etc. It isn't anything in particular. 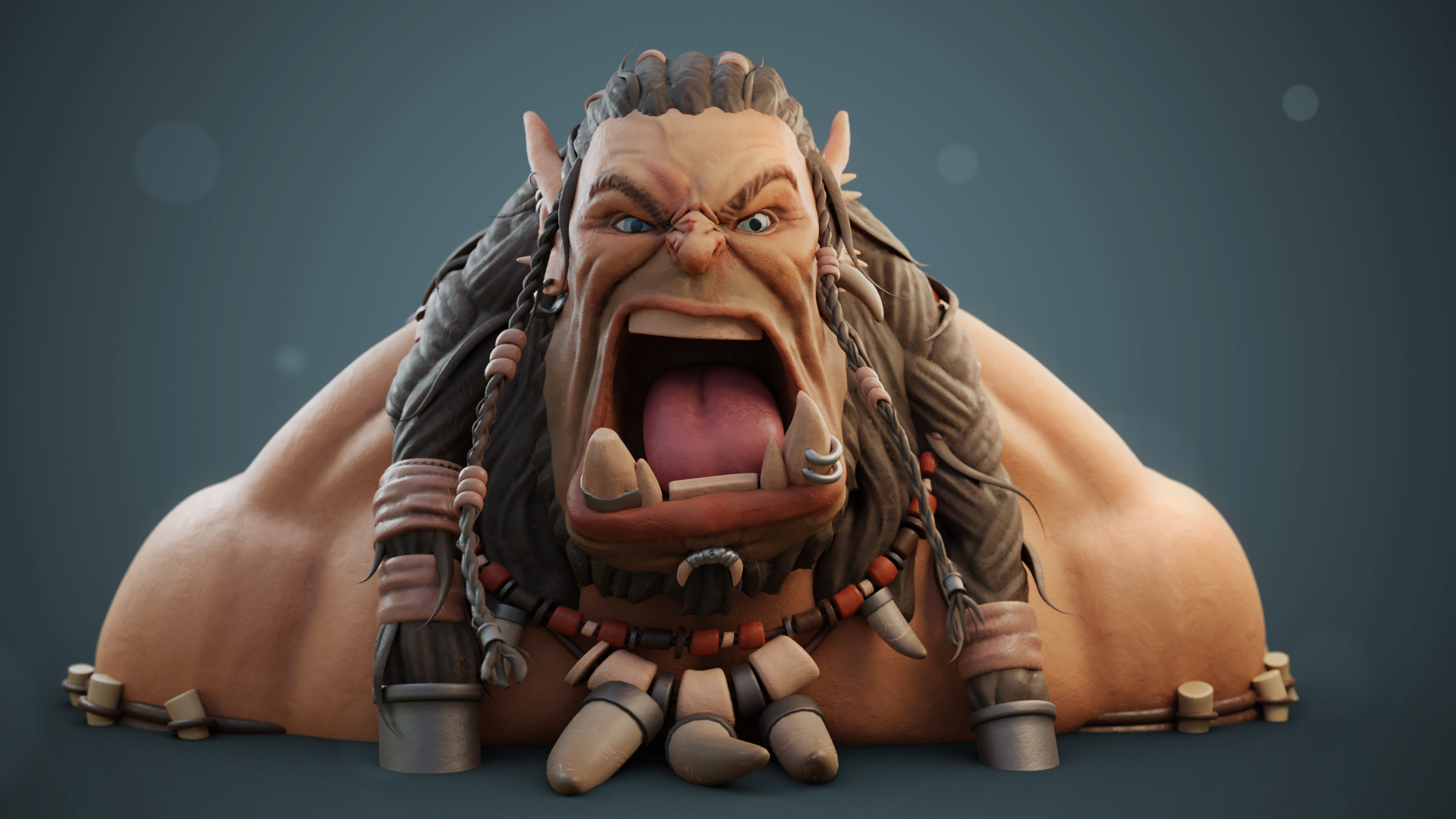 You are a prolific creator: how do you keep yourself motivated to create new things regularly?

I simply have a great passion for 3D art and characters. I really enjoy the character creation process in Blender and I feel great pleasure when I finish and see the final result.

One of my goals is to improve and reach a much higher level and I believe that I will only achieve it by constantly producing new things that keep me practicing and learning. That's why I'm so motivated to create. So much that when I see other peoples' concepts which I think would look cool in 3d, I go for it. That keeps me on track and also gives me another piece for my portfolio and YouTube channel.

Can you take us through the main parts of your workflow, from concept to render?

My workflow for creating these characters always follows the same stages. 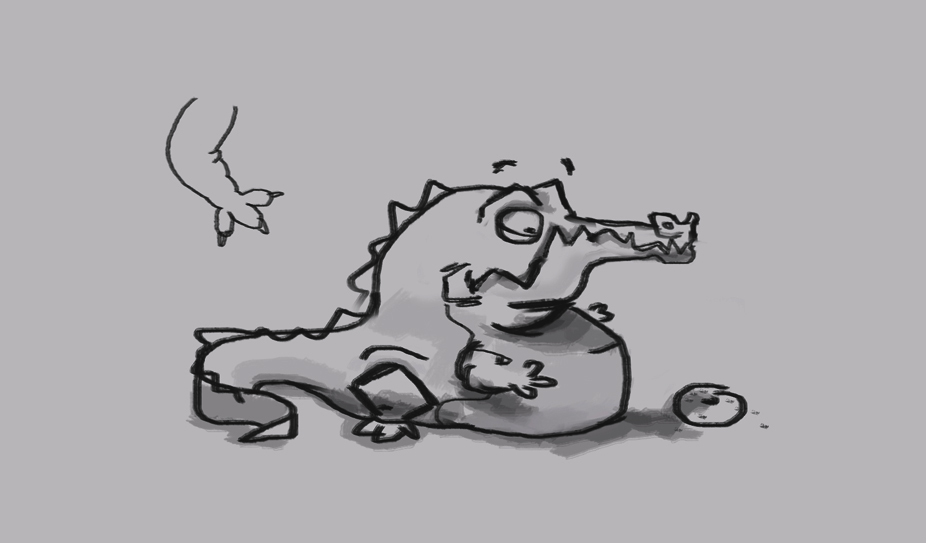 First I try to have a great concept. I think that even the worst 3D modeler, if following a great concept, can create an appealing final result. For one of my creations, the crocodile “Croco-Roco”, I was observing the clouds and I saw a funny one. It had kind of a fat turtle shape and I took a photo of it so that I could sculpt it later. I tried drawing a turtle concept out of that picture and it accidentally turned out as a fat crocodile. But I loved it, so I went for that concept and forgot about the cloud. 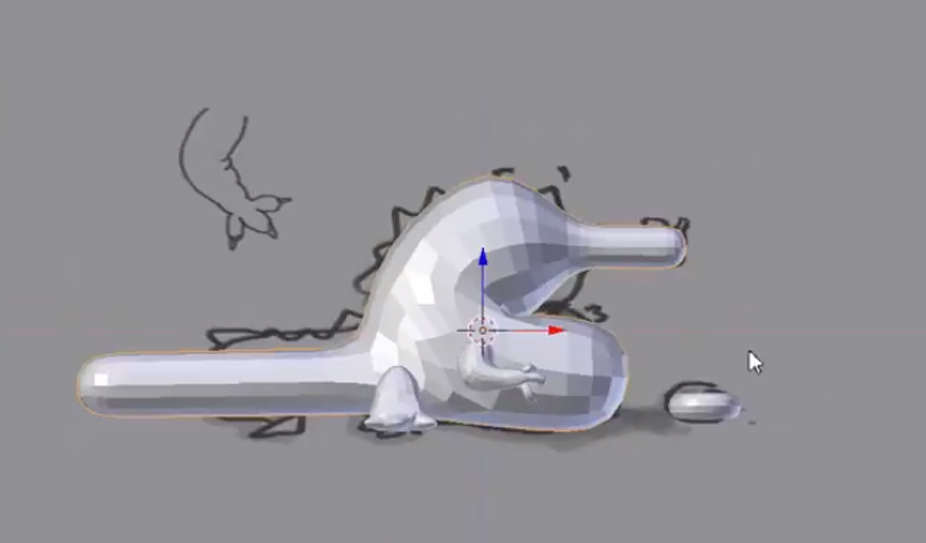 Blocking out the base mesh. In this stage I create the basic structure, the base mesh in which I will sculpt the character. I try to keep the different parts of the body separated so that later on it's easier to focus by parts. This is a really helpful step because it's easier to manipulate the mesh using simple primitives and once you complete the base mesh, you already have an idea of how it is going to come out. 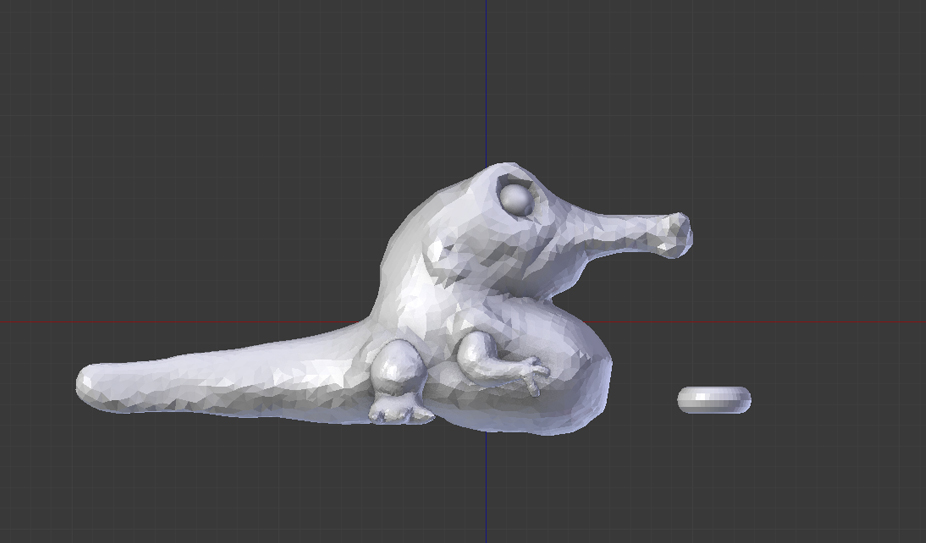 Basic shapes. This is where I start sculpting the main shapes in Blender’s sculpt mode. So I deform these primitives to match the character’s overall figure, always keeping it as basic as I can. Usually I use the grab brush a lot in this stage. 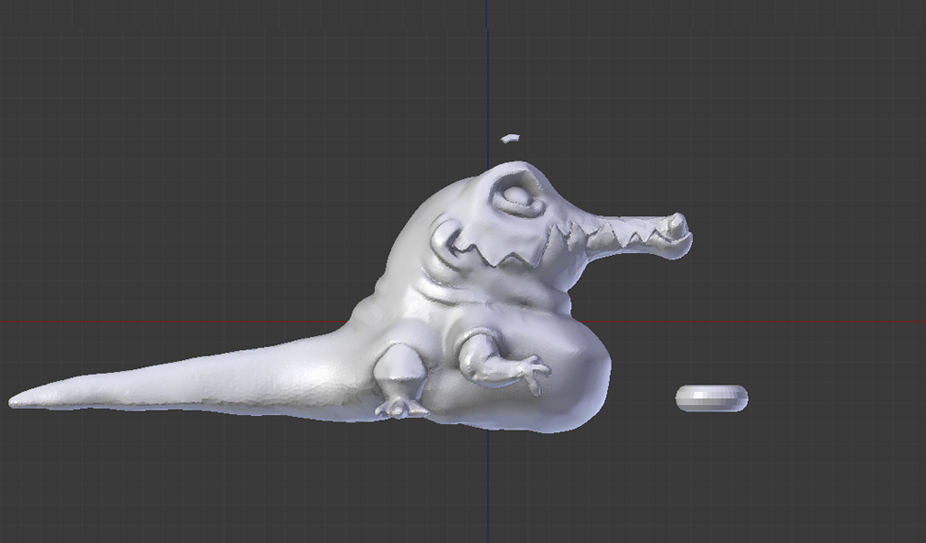 Dyn Topo. Using Dynamic Topology I continue to shape the character. I generally start with a constant low resolution and continue adding resolution gradually until I get to a point where I change the method to “Relative detail” or “Brush detail” where the amount of detail increases (or decreases, depending on the distance I am from the model or the brush size). This is really helpful for the final details. I also go ahead and join the different parts of the mesh in a single one to get those smooth transitions where needed. This can sound really organized but I do come and go A LOT in this process so it isn’t really a linear process for me. 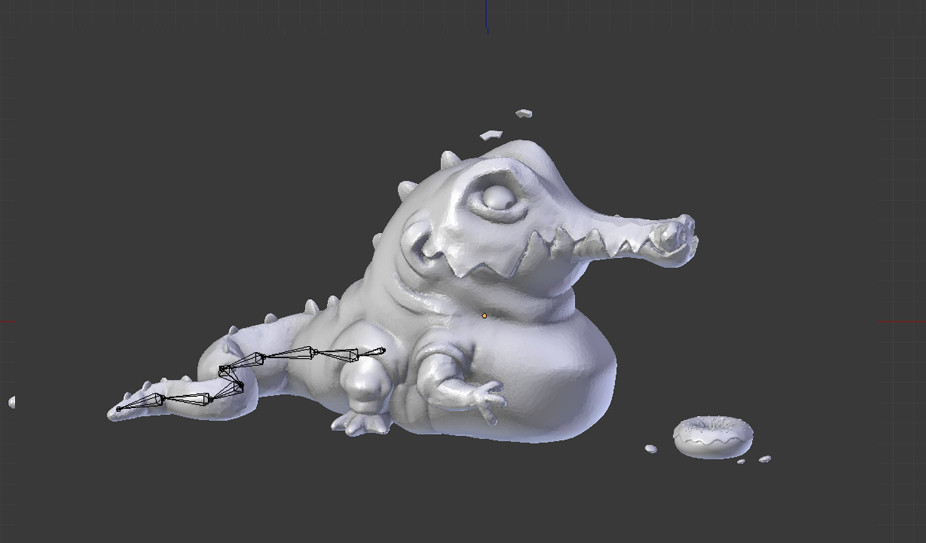 Posing. Once I've finish the sculpting process I try to add a little pose to the character so it looks more interesting. I usually don't do retopology to my characters so I have to apply a decimate modifier to get the mesh lighter so that it doesn't freeze my pc. I create some bones and set the parent using automatic weights. Generally the automatic weights work fine for me and don't need any tweaking. After the pose is done, I can apply this armature (or not) and correct some final details. 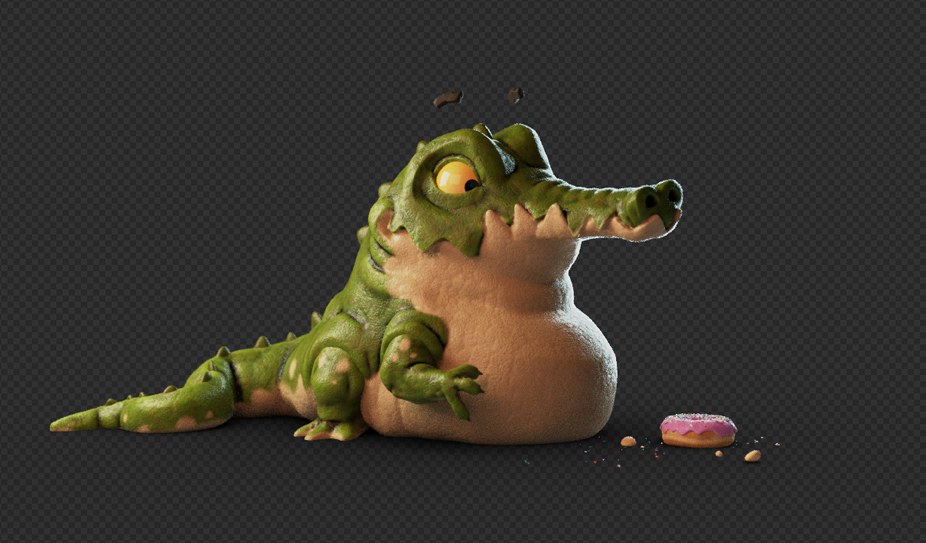 Rendering. For materials I have two options. Either I simply create a smart UV unwrap and paint it with the texture paint tool in Blender or I create them using only procedural shaders & vertex paint. For most of my characters I used procedural shaders. Using Noise/Voronoi textures, MixRGB nodes, Color Ramps for better control, all of this plugged into the inputs of the Principled shader. A lot of this stuff I learned from Zacharias Reinhardt’s “Mastering sculpting” course, it was really useful.

Post Processing. After I render the character with transparent background, I usually add a colored gradient for the background and some RGB curves for the values. I often add an AmbientOcclusion pass to get things more interesting and that’s it,  character finished!
Youtube. I record the full process and upload it to my YouTube channel in 2 versions, in Spanish and Portuguese. If you don't speak these languages you can also mute it and put some music on!