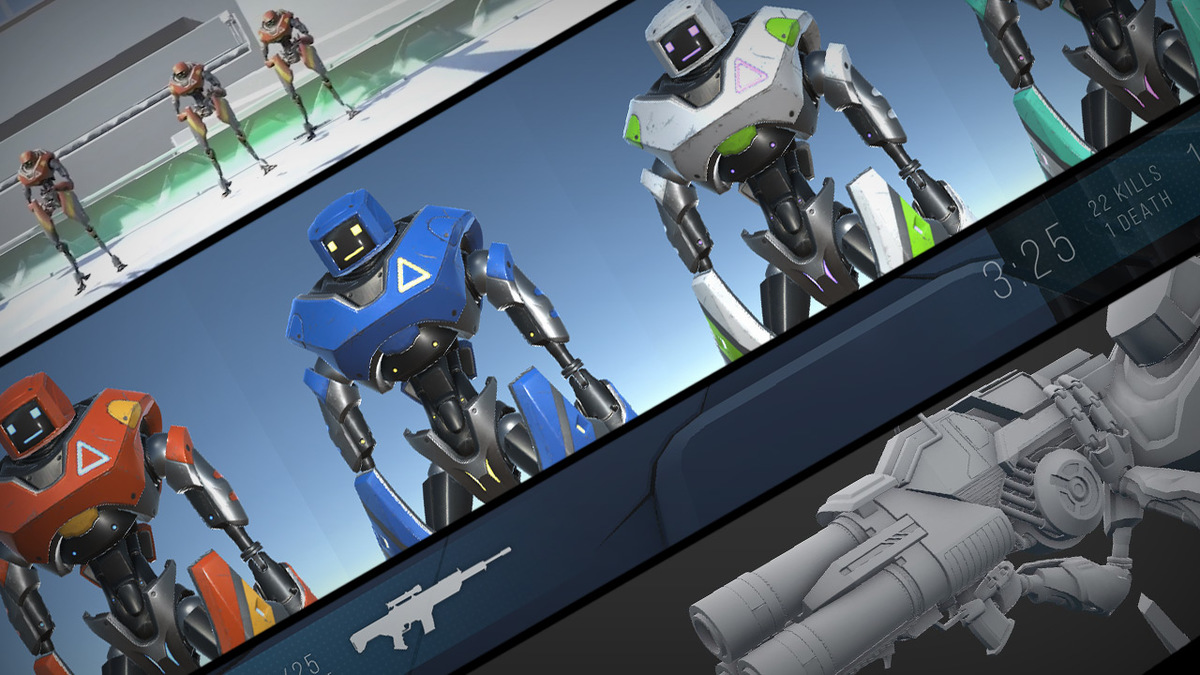 At this point in the production, we've taken a step back and re-evaluated what we're doing. One of the most evident take-aways so far: Good games take a long time to make. We're about 3 months into this thing and, while we've made huge progress, we're still a fairly long way from completing the game and its Learning Flow. Therefore, over the last month we've transitioned the artists (me, Tim, and Jonathan Lampel) from 100% game production to about 25% game production, 75% education production. Because man, have we learned a ton along the way. Personally, I've not learned this much new stuff, in a new context in a long time. It's been an absolute blast. So while it's fresh, we're eager to get the initial game asset courses recorded so we can share with you ASAP!

While we artists are currently only 25% devoted to game production, Jonathan Gonzalez (Gonzo) is still full force!

The past few weeks have been quite a challenge. We've been working on getting our robot character into Unity with animations from Blender. Getting them to work properly was a bit of a hassle at times. Certain bones would rotate and/or we'd get weird subtle movements in the animations due to the humanoid rig we created. IK control in Unity was also something I wanted to include as it opened up the opportunity for more procedural movements such as dynamic aiming or even just crazy poses such as shooting your gun in the air. I've also been working on the weapons. While the final models are being finished in Blender, I was able to develop weapon functionality with proxy geometry. It's neat to see animations, muzzle flashes and, general weapon mechanics coming together. -Gonzo

One thing Gonzo didn't mention was the online multiplayer work he's been doing! We have dreams of hosting the game online so you guys can take a break between courses to face off against us, the CGC Crew. How cool would that be?! This past week we successfully tested the possibility - a first for us!

THE ROBOT IS FINISHED!

You may have noticed in the video that the robot has textures now. That's because it's done! Game-res model and PBR textures are complete:

Since we're aiming for online multiplayer, it only makes sense to build a character customization feature into the game. We're thinking choices for primary color, secondary colors, and LED color.
WEAPONS & HUD
When Lampel hasn't been recording the Normal Mapping Primer, he's continued work on weapon building. Recently he completed the high-res version of the rocket launcher! Lampel has also been designing a HUD (heads-up display) for the in-game UI. Something sleek, minimal, and sexy.