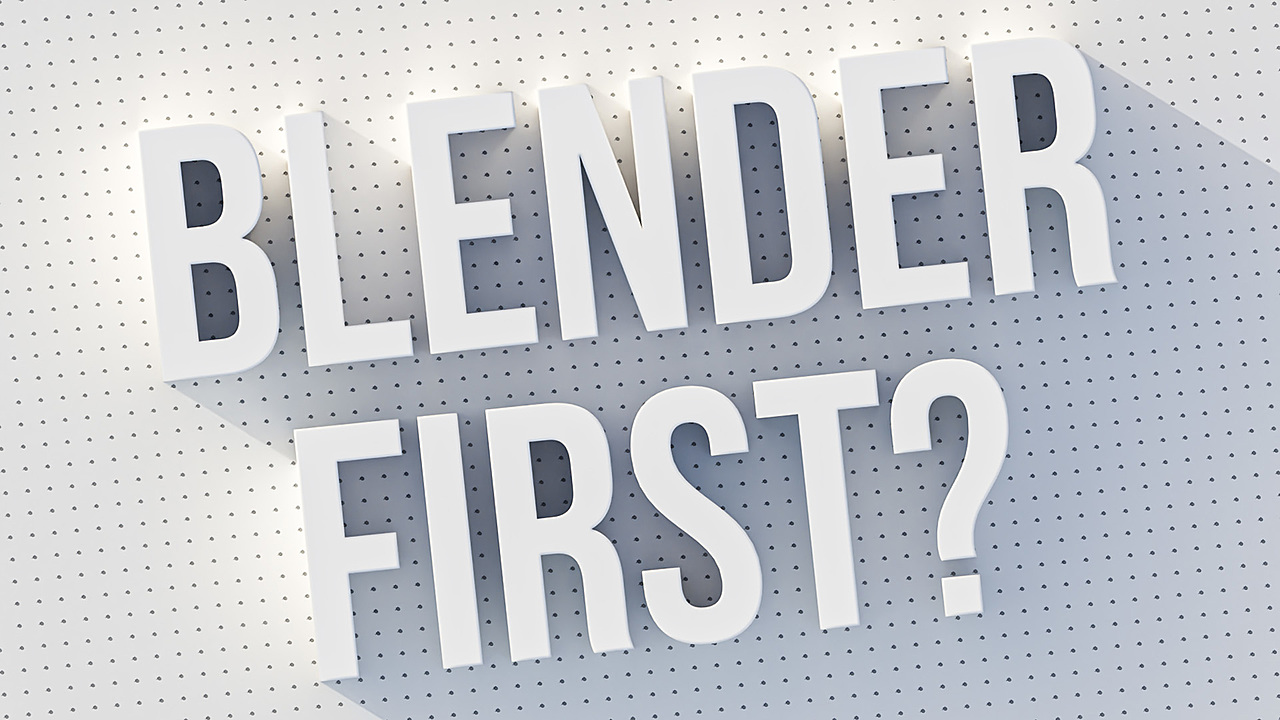 If you’re going to start learning a new piece of software for a new skill, you’ll  want to pick the best one. When it comes to 3D graphics, there are only a few main options to choose from and there are a lot of comparison videos and articles online that cover which one is technically the best in one domain or another. While those are excellent for experts who already know exactly which features they need, I think the way the comparisons are often presented is actually answering the wrong question entirely for beginners.

Here’s why Blender is pretty much always going to be the best first step to learning computer graphics:

Even if it hasn’t happened to you, I’m sure you know at least a few people who have spent precious time and probably money working towards earning a degree or getting a job only to find out that it’s not actually what they want to do in life. The idea of the dream may have been enticing but the reality of doing it was so different from what they were expecting that they either jump ship and start from scratch with something entirely different or stick with it begrudgingly simply because of the sunk cost.

To some degree, that happens to everybody. It’s just part of learning more about yourself and what you want to do in the world, and that’s never a waste! You can, however, save yourself a lot of time and money by learning the day-to-day reality of something before investing in it too heavily.

3D software can be incredibly expensive and it’s all going to have a pretty steep learning curve regardless of which one you choose. By picking the one that’s free and is the easiest to learn (Blender) you’ll be able to much more quickly find out if 3D is something you want to continue pursuing.

Blender is also the most fun to learn, in my opinion (which of course is subjective), but I don’t think the benefit of enjoying the process should be under-stated. It’s so easy to apply physics to stuff, create weird particle systems, and just mess around with sculpt brushes so that, along the way, you don’t lose the magic of how incredibly cool what you’re doing really is.

2. Everyone's got your back

One of the main reasons Blender is the easiest to learn is that it has the biggest and most helpful community. A core by-product of Blender being so easily accessible is the sheer volume of help that you can find online. There are hundreds of high quality tutorials, several forums you can ask questions on, and loads of premade assets like models, rigs, effects, and scripts you can get if you’re just trying to smash something together really quickly and need it to look great without having to learn every step of the process just yet.

Here are some of my favorites (not affiliates - they're just cool):

All of those resources combined serve to boost your momentum so that you can get up to speed a lot faster than with other software.

3. It keeps your options open

Blender is a pretty standard tool for indie studios, small teams, and freelance artists, so obviously there’s plenty you can do with it. Let’s say, however, that you want to work at a big studio that has invested so much in their production pipeline that they can’t switch programs even if they want to because it would be an incredible amount of money to do so even if the software itself is free. Does it still make sense to learn Blender first if it’s not what people at your dream job are using?

Actually, yeah! For two reasons. The first is that Blender’s code is surprisingly small and fast. Last I checked, it’s under 130mb. Because there’s no concern about licensing, you can just run the .exe from a flash drive if you need to. That portability means you can take it with you anywhere!

Each 3D application has unique strengths and weaknesses. There isn’t one that’s 100% stellar at everything. So, having an alternative tool literally in your back pocket that you can use to do certain things (like modeling) faster in before exporting back to your main program can really save your butt if you’re facing a short deadline.

The second reason is that learning your first 3D software is sort of like learning your first programming language or learning to paint for the first time. The fundamental skills and concepts you learn will transfer over if you want to switch to a different language or a different style once you’ve gotten the fundamentals down and you’ve decided you want to try something new. It’ll still take some time to get used to a different software and it may have a bit of a different paradigm, but it’s not like all that time you spent learning the first thing was wasted. You’ll bring that experience with you.

While Blender, Maya, Houdini, and ZBrush all have different methods of making things, the core concepts of what makes a quality model or a quality animation are remarkably consistent throughout. How topology should connect or how keyframes should be interpolated won't suddenly change. If you’ve learned enough to make quality stuff with Blender, you can pick up any new tool pretty quickly.

The faster you can learn those fundamentals in one tool, the better artist you will be in any of them.

4. Blender is #1 at creating ideas fast

If there’s one main thing Blender is way better at than any other software out there, it’s getting ideas from your brain and into 3D space as quickly as possible. The modeling workflow is blazing fast, sculpting has been getting some pretty clever time savers in recent updates, Eevee can render out great looking effects in real time, and you can even sketch concepts out right in 3D space with the grease pencil. Add to those a plethora of presets and addons that you can get to speed stuff up even further and you’ve got yourself a tool that is perfect for failing faster.

I’m sure you’ve heard that mantra before - it’s the idea that the faster you can iterate your work and try enough ideas to find the best ones, the faster you’ll be able to produce truly excellent stuff. Remember, learning how to make quality art is harder and more important than learning what buttons to press in a software. So, by using a program like Blender that is focused on letting you get ideas “on paper” as quickly as possible, you’ll be able to improve that much faster as an artist.

Once you have learned the tools and can make good looking renders but hit a roadblock or find yourself constantly hitting a technical limitation of Blender, then it'll be a great time to find out what software is best in class at that one thing and learn that too. For procedural modeling and physics that would be Houdini, for texturing it would be the Substance or Mari, for cloth it would be Marvelous Designer, for sculpting it would be ZBrush, etc.

If you’re just starting out, however, those programs are probably complete overkill. It’s really common for me to see beginners think that they need some flashy or fancy feature in Blender or some other program to solve all their problems when actually they have a workflow issue or a misunderstanding of the fundamentals. By saving the specialty software for later and, as a beginner, just focusing on making good art with the core concepts that all 3D programs share, you will progress faster and be better prepared for learning any other tool in the future.

5. It’s completely free for any use

I know you saw this point coming a billion miles away, but I don’t just mean free to download. Lots of software has educational versions that you can easily get (Autodesk did WHAT?!), but they often have limitations and you can’t use them for commercial use. Remember that thing about failing faster? Well, that’s pretty true about production overall and not just about creating concepts. Because Blender is open source, you can start freelancing and trying to get contract jobs as soon as you want. Getting that sort of experience as soon as you can rather than waiting until you have enough money to pay for your own licenses and subscriptions or feel that you're good enough to justify them is really great.

I did minor freelance jobs here or there as a student, well before I had any business calling myself a “professional” 3D artist, and it forced me to get better. You’ll be surprised at how much you can suddenly figure out when you’ve got a deadline and your income is on the line because there’s no alternative. It's sink or swim. Even if you don't know it yet, I bet you can swim.

Whether you’re learning Maya at school or using ZBrush for work, you cannot use those on the side without paying full price. You either pay a lot upfront for very little short term gain and hope that you'll eventually make enough back to justify the cost, don’t do the extra work and forfeit the extra experience, or you’re breaking the law. None of those are great options. If you already know Blender though, those will never be concerns!

The only reason it can be free is because of the generous community. While you'll never have to pay to use it, I'd recommend donating to the development fund, getting involved, or using products that support community creators and development.

So, Blender is the best 3D software for you to learn right now.

I’ve got one caveat here - I teach Blender for a living, so I'm obviously biased. I wouldn’t be teaching Blender in the first place, though, if I didn’t actually think it was the most helpful.

Like I  mentioned earlier, there are a million free tutorials out there, and I’d highly encourage you to watch them! Just be careful of getting stuck in the infinite loop of beginner tutorials where, after a certain point, the gap between number of videos watched and amount actually learned starts to widen a bit. Our goal at CG Cookie is to work ourselves out of a job, at least for each individual going through our courses, so that you can make more and more stuff on your own with confidence and... not need tutorials!

Regardless of how you learn Blender though, the main point of this article is - go download it and give it a shot! I promise you’ll be glad that you did.