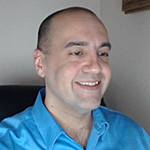 This is the Missile Barrel X3 launcher loaded with a round of missiles. This is the final, in-game model for my Hover Tank Arena game that I am developing in Unreal Engine. You can see that most of the final details are actually captured in the textures. I have included an image of the un-textured 3D model in Blender. This shows how much of the detail is actually made possible through the base color, metallic, roughness and normal maps when texturing.

The actual model is fairly low-poly as you can see in the close-up render of the missiles.