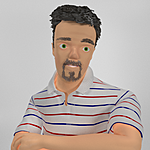 These are two quick bases I developed as a part of Sculptember. The materials, though, are based on Kent Trammell's Shader Forge series on marble, but I instead of using the "old" nodes, I tried to see if I could get the same or similar effects with the new Principled BSDF in Blender 2.79 RC2. The texture looked great on the Shader Forge totem but took a lot of tweaking to look good on these objects here.