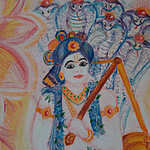 My most recent completed project since joining CG Cookie, using my first completed course from CG Cookie! Made in Blender 2.93, rendered in Cycles, 256 samples.

This 3d character is based on histories from ancient Indian scriptures about Vamana, a dwarf incarnation of Lord Vishnu. He appeared as a child Vedic student. His bodily complexion was that of flax flower. He was wearing a deerskin and matted hair, carrying waterpot, brahmana stick and an umbrella.

I recently completed the Realistic Hair tutorial by Kent Trammell

and made a good use of the newly gained knowledge in my character (though I was not aiming for high realism, this is more of a stylized character).

Character mesh based on tutorial by Dikko on YouTube