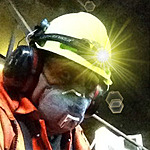 In October 2017 I decided I should improve my sculpting skills, how should I go about this I thought? Well I'd just watched Kent sculpt something from a 2D image so I thought what might not be too complicated that I'm also interested in. So how about a woman's shoe and leg I thought that can't be too difficult to do. So here we are 3 months later and I've decided to finish it and call it a day.
I started with a skin modifier as Kent did and then sculpted away, not too long afterwards I had something that resembled the shoe and leg, Eventually I felt I had achieved a suitable sculpt to use the retopology addon to create a base mesh. I managed to create the shoe easily enough but the leg was a different matter. As it was only an image I was trying to achieve I decided to split the shoe from the leg and stay with a sculpted leg.
Adding the fishnet pantyhose was the next challenge, I considered texturing and normal mapping, displacement modifiers etc. But in the end modeled the fishnets using 5 modifiers, 2 array modifiers to generate the diagonal mesh, a curve modifier to produce a tube of the array meshes, a shrink wrap modifier to attach the mesh to the sculpted leg, and finally a wire frame modifier to produce the fishnet effect. It took me a long time to perfect the set up and you will see it’s not perfect but I decided I had, had enough and went with the result shown.

I have also used Pro-Lighting Studio to apply a lighting and scene layout to the sculpt, as this allows me to try numerous lighting set ups quickly. I can thoroughly recommend this package from Blender Guru, as it allows very quick viewing of different lighting with minimal effort.
So this is not perfect but at least complete.