back Tibbetts, the Guinea Pig 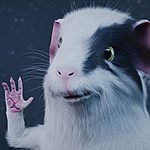 Check out the progress of the film here! https://blenderartists.org/t/blender-feature-film-the-story-of-ven/680623/69

This is Tibbetts. He’s an important character to the plot and is definitely a more interesting character in general. As a pup, he was apparently diagnosed with a form of autism, due to his behavioral issues. Because of this, he couldn’t make much friends, if any, and didn’t get along with his own siblings. As time passed, he slowly grew out of his autism, and became a very smart individual. But sadly, his peers had already marked him an outcast, and his intelligence came off as being a smart-ass to others. This made him one of the most hated individuals in the village. Nowadays, Tibbetts usually hangs out around the edge of the village, meditating to nature, alone.

This character was inspired by a really good friend back home. His character, personality and motivation was very inspiring to watch. Thus inspiration became creation!