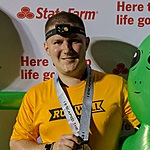 Taking what I have learned and applying it to a small project.
So at this point I think I have the basic character down, now just trying to create the costume over the base. Taking most of the costume design from rebels concept art of an imperial soldier, actually aiming for that particular style in this case.
Added a very quick lightsaber stand in, the material is a fresnel mix of red and white so that the blade itself looks white, yet the light it emits is red. The glow itself is altered from white to red in compositing.
Hoping to sculpt in the rest of the detail on the helmet soon. Definitely have to say retopoflow has been a great help to this build.