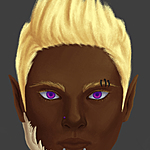 Starting this so I can keep myself accountable.  I want to get better at 3D modeling and I need an external force to keep me going.

Nothing spectacular, but it's something.  The first modeling exercise: https://skfb.ly/68ExD