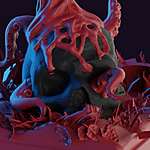 Working with a simpler primitive

I should preface this by saying I already have some light modeling experience (though I've never tried to model a soccer ball) but the geometry with an ico sphere that's been subdivided 5 times struck me as a bit too intimidating. I got a similar result by using the most basic ico sphere and vertex-beveling each vertex. Then apply a sub-d modifier with 2 subdivisions. From then on you basically follow the same procedure as in the video, but with way less dense geometry so there's a lot less hassle. When you're done adding the additional loops you can throw another subdivision modifier on there to get the final result.