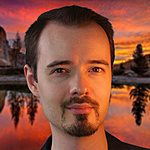 Really great introduction to understanding loops-- and a note about monkeys...

This was a very well-explained video to show the topology flow of a head-- excellent reference. Thanks so much, Jonathan! I'm really looking forward to following along with the rest of this series.

On a side note: one thing you mentioned in the video was that "we came from [monkeys] at some point"... I just wanted to mention that there has never been any scientific evidence to prove this commonly believed fiction, which is unfortunately taught as "fact". Similarities (homology) in bone / muscle design, or in molecular structure between species does not imply a common ancestor but rather a common Designer.

Imagine if the character you made was alive (in his world of 3D), and began claiming that "since my genetic makeup of vertices, edges, and faces is shared with this chair, I must have evolved from it. Jonathan Lampel didn't design me. I just happened. I shall call myself... an A-Lampel-ist." Now you know how God must feel when His creation says the same... :-) Further reading on homology: https://answersingenesis.org/biology/homology-comparative-similarities/

I hope you will find this info helpful. :-)