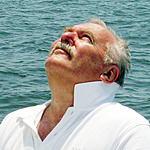 Uploading primitives for Model with Primitives

I expected a better Lesson from cgcookie. Something's wrong. After finally figuring out how to upload the primitive model (poor integration with SketchFab) and no instructions btw.

cgcookie submit button gives no indication the model was uploaded - explains the identical models on Sketchfab as one keeps trying.  Gave up, uploaded eventually with the Sketchfab add-on in Blender.

Sketchfab is another story - the model looks fine in Blender but is invisible in Sketchfab. Faintly visible in wireframe mode but the other modes are transparent. Using an iMac with Safari to view.

So the question is what gives?