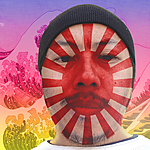 Prologue
1. The female cousin set up a gofundme page for her cousin's funeral.
2. All her relatives come to the funeral and stay until evening.
3. The undertaker put the dead body in the morgue (nearby building).
4. The janitor and his pet dog go up to the morgue and do some of his daily routines.
5. The dead corpse rose ....

Main Idea (project submission)
Left panel:
- fear 😨 on the janitor's face, hand holding the flashlight shaking
- the dog whimper in the corner of the room

Right panel:
- the corpse trying to get in
- gruesome face smear on the glass door, its horrifying face scares the crap out of janitor

Epilogue
1. The janitor along with his company stayed up all night shivering in the office. They waited until dawn. The corpse return to its slumber.
2. The janitor explains the situation to the supervisor and polices. None of them believe him.
3. However the couples, the cousin's in-laws, believe the janitor's story. They know what happened.
4. The supervisor and the cops were utterly dumbfounded there was dirt on the corpse's feet.