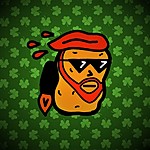 I've always had an interest in vfx and video games, and to have access to the tools to create these things is amazing! Like many people, I started my Blender journey with the Donut Tutorial from Blender Guru. That was a great start, but I wanted more, CGCookie is the place for all the learning I could ask for. So now it's time to keep a record of all the things I create along the way, to measure my progress and push my inspiration forward. Lets GOOO!