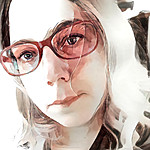 I thought I would start one of these polybooks in order to share some of my wips and whatnot. Hopefully by sharing it will help keep me motivated when I'm feeling stuck.

Intro: I am a 50-something female living with my partner in the Seattle area. I've been doing art all my life and have been particularly drawn to sculpture - both digital and real media. I have a very bad habit of not finishing projects. I originally tried to learn 3D modeling in the mid-90s using 3D Studio...not Max, the one that launched from DOS. I modeled Tom Servo from MST3K and decided 3D wasn't for me (ha!). I ended up doing a 3DS Max course and a Maya course in the mid-2000s and when I ran out of time on those I picked up Blender, which was pre-2.5 at the time. Then I faded from 3D work yet again.

I got more interested in Blender after 2.5 was released but mostly used it just to mod stuff. I don't think I really got into it until the sculpting tools were released and my mind was completely blown. Since then I've tinkered with it on and off each time getting deeper and deeper. I love the "Swiss Army Knife" nature of Blender and especially love the vast and diverse community that has grown up around it.

My 3D goals are to be able to create semi-realistic and realistic characters and environments. I also love stylized work but, in spite of being mostly a cartoonist in 2D, I struggle with stylization in 3D.

I've been kicking around CG Cookie equally on-and-off since 2011.