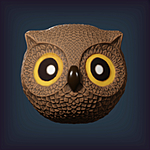 This was even more fun to work on than I thought it would be. I added a couple of extra elements, see if you can spot them :-)

It is not as good as I imagined it, but I'm happy that I managed to stay on top of the noodles and handles long enough to tell the story.