Practice sculpting the basic behaviors or fabric. Fabric and clothing are very common for sculptors interested in character design. Reconstructing the believable behavior of fabric is an art in itself. Initially it can be intimidating due to its apparent complexity while seeing how bad fabric can look when it’s sculpted incorrectly. But in reality, fabric behavior is governed by simple principles. In this exercise we’re going to practice these principles to prepare us for sculpting realistic fabric every time. Use this visual Reference Guide as you practice: 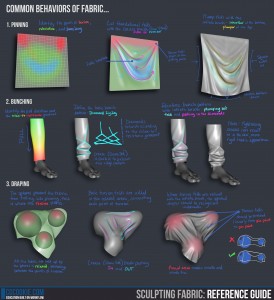 First Stage: Pinning — Let’s start simply with a hanging piece of square cloth. Imagining it’s something like a sheet on a clotheslines, treat the sculpt like it’s pinned in both corners and being pulled downward by gravity. Think about which areas are under tension, which areas are relaxed, and which areas are bunched. Second Stage: Bunching — Next, let’s use the example of a pant leg where we have a tubular piece of cloth encasing a column with an object of resistance at the bottom (the foot). Due to gravity and the resistance from the foot, the cloth bunches. Consider what this means for the fabric’s behavior: Which areas bunch more or less? What is the resulting wrinkle pattern? Also play around with tight creases versus soft wrinkles to see how they can make the fabric feel thick or thin, flexible or rigid. Third Stage: Draping — The last practice example is a mixture of the first two. Imagine a piece of cloth is dropped on top of 3 stationary spheres. The spheres prevent the cloth from falling, resulting in pinning behavior since they’re they objects of resistance. Therefore the portions of the cloth that are directly resisted by the spheres conform to the spherical shape. Meanwhile the areas of the cloth that aren’t directly resisted remain relaxed and pulled by gravity. The important thing to gauge your result is whether or not you get a clear idea of the object underneath that the cloth is draped over. Fourth Stage: Pants — After practicing the examples of basic cloth behavior, let’s put our fabric-sculpting ability to the test with an article of clothing. Remember, start simply by identifying areas of tension, relaxation, and bunch. Fifth Stage: Shirt — Again, let’s put our new skills and understanding to the test by sculpting a female shirt. This is a true combination of each fabric behavior: Pinning, Bunching, and Draping. 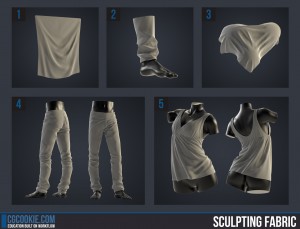