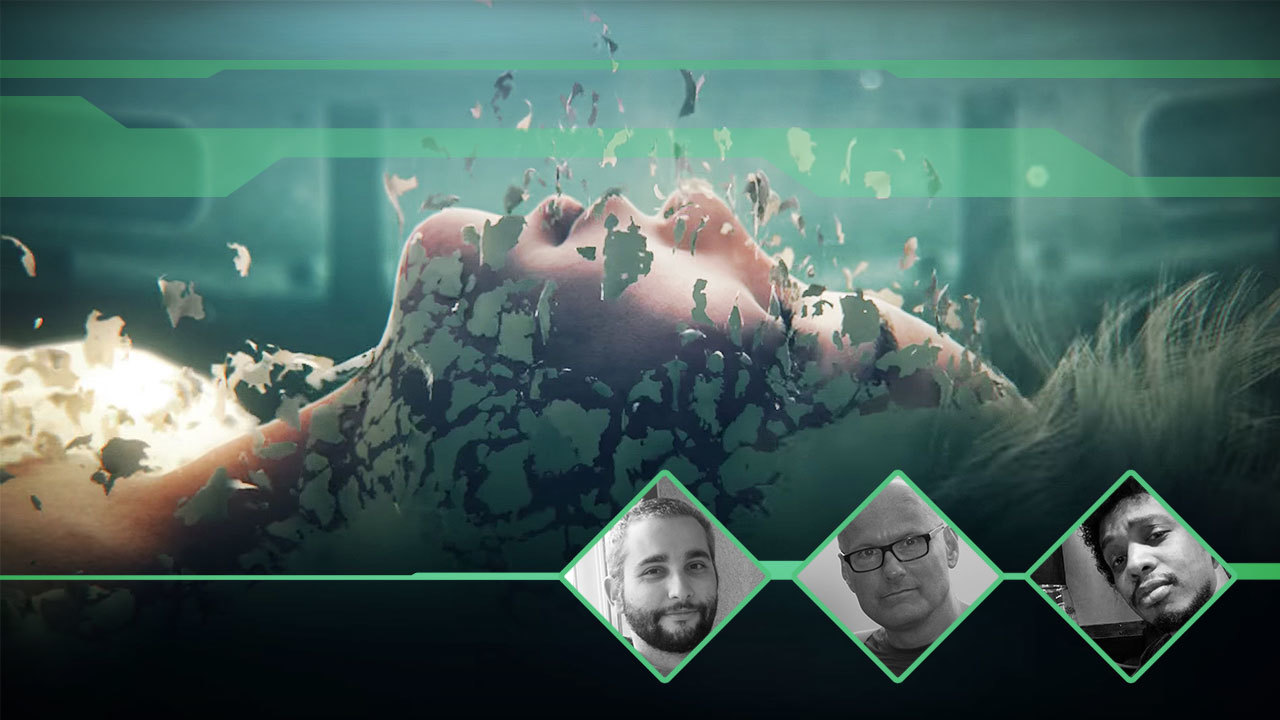 This fan film was created primarily with Blender and is nearly a shot-for-shot CG remake of the opening sequence from 1995's sci-fi anime classic.

How many people worked on the "Ghost in the Shell" fan film? What were their roles?

LEZLY PRAGER: My original idea was to start with three people and gradually enlarge the group with different specialties, but...well, let´s say that things did not exactly go the way I planned!

I wasn't able to find an animator and eventually had to take on the animator role on my own, even though I had zero experience.

We ended up as a team of three: Pascal Deraed, Max Maurel and myself.

Max modeled, sculpted and shaded the project characters, took care of Motoko ‘flesh’ version and on the top of that, he animated a character in one of the scenes.

As for me, I directed Max and Pascal and was also involved in the production. I modeled the robotic version of Motoko before Max did the ‘flesh’ version. I also took care of the fluids, particles, smoke, hair and the shading of the Motoko ‘flesh’ version, its rig, animations, rendering and final compositing of the scenes.

Pascal took care of all the design work, modeling, shading of all the environments and base lighting of these scenes, which I then finalized.

PASCAL DERAED: When Lezly asked me to get involved and create/texture all the environment scenes I really thought he was crazy - especially after I had reviewed the original 1995 short movie! I told him that and we had a good laugh. But obviously I got involved in the project even though I had a good idea of how much work this would take.

I designed all the environments and props. Lezly wanted all the major elements from the original video to be represented in our short movie. Apart from that I had total control over the rest of the design which was totally awesome from a creative point of view. That included texturing.

Lezly, how did you come up with this version of "Ghost in the Shell"?

LEZLY: I happen to be a big fan find the 1995 version: it is a sci-fi masterpiece, in my opinion. When I came across the GITS 1995 video, I fell in love with it and started to dream about a 3D version. I imagined it would be a breath of fresh air with beautiful environments, sculpting, hard surface robotic modeling and many other advanced elements. And lets not forget the artistic side! I became obsessed with the idea, even though I knew it would be a massive project.

Communication turned out to be one of the toughest part of the whole project.

I started modeling the robotic Motoko, but it soon turned out to be the most advanced 3D model I had ever created. I reached out to Pascal for help and called Max, too. Both were immediately excited by the idea and in our spare time we started working on the project together.

The three of you collaborated remotely: What was your communication like?

LEZLY: Not easy! Pascal lives in Sweden, Max and I in different parts of France. We communicated via Facebook and had an occasional Skype call. We´ve had a few misunderstandings but in the end we all wanted this. I am proud to say that I had the opportunity to work with two awesome artists.

PASCAL: It took lots of chatting on Facebook before we were clear on all aspects of this project. In a perfect world, everything would go as planned, but in reality, communicating through Facebook turned out to be a project in its own right.

While working on such a project, communication is one of the major parts. GiTS became so close to our hearts and from time to time we all got caught up in our own thoughts, wanting to show off our skills. We even had to completely recreate major parts of the project because of some misunderstandings!

Lesson learned: It is essential to discuss all aspects of the project before the actual production. Otherwise you will end up focusing on the wrong things.

This may sound cliché, but the respect for everyone and for their skills are really key elements if you want to succeed with such a project. Without that, you could never make it. As Lezly said, we've had a few bumps and misunderstandings but it was worth it! We always ended up laughing and compromising. 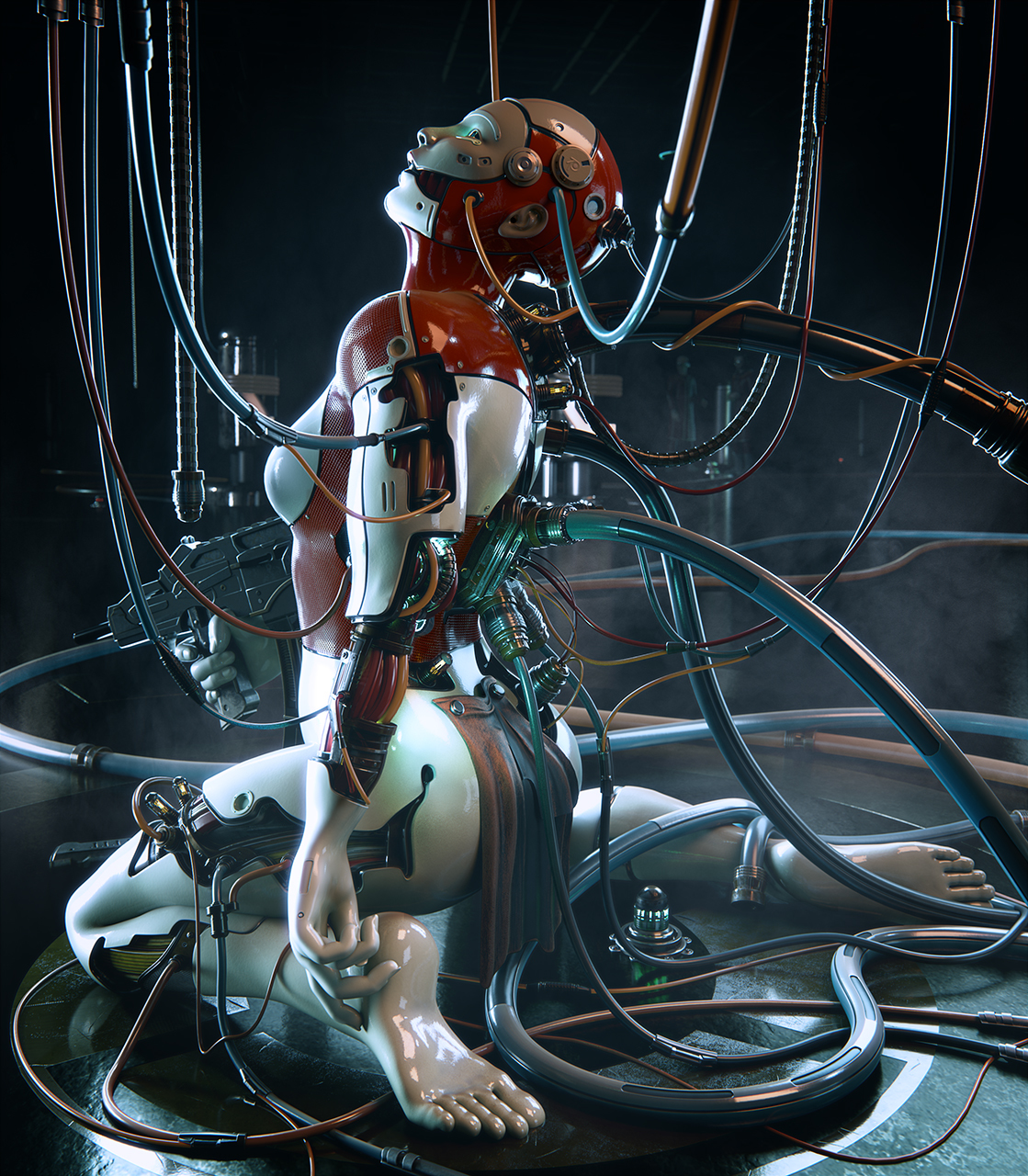 Why did you choose Blender as your main tool?

MAX MAUREL: I had been using non-open source 3D software for about 16 years and when I started working as a layout designer for a small company, I thought that adding 3D to my workflow would be a great idea. Unfortunately, my boss was not interested in paying extra money for a new software licence so…I installed Blender 2.45, bought a book, and started practicing. I never went back to another 3D software!

I like the highly customizable interface and the fact that it's an all-in-one software, from modeling and sculpting to compositing and video editing. It makes the whole thing very intuitive, since you don't have to learn multiple apps' shortcuts and everything again and again. I also like the huge amount of addons available for Blender. In this project, I intensely used Speedsculpt and Retopoflow which is a must have for dyntopo sculpting and retopologizing.

I'm never going back to any other 3D software!

PASCAL: I would keep using Blender even if I had to pay for it. My first encounter with 3D was with 3D Studio many years ago. I was a layout designer at that time and lucky enough to get jobs at companies that encouraged new technology. So I got to learn 3D software like 3D Studio Max, Lightwave and others. I loved it!

Today, Blender is my first choice as far as hard surface modeling and texturing is concerned. It is very easy to operate and it offers a large range of addons and intuitive hotkeys that can be use to seriously speed up your workflow. For example, I frequently use the Looptools, Booltool and Carver addons. Those are extremely handy if your focus is on environment and mechanical art. The Ctrl+E and W shortcuts in edit mode also give you access to all you need to create awesome meshes.

Blender is constantly improving and it's hard to keep up with. Fortunately, the humongous community is filled with inspiring people who regularly contribute with high quality articles or tutorials that cover almost all the user needs.

What other tools do you use in addition to Blender?

LEZLY: For compositing I used After Effect with key plugins that helped me greatly in terms of denoising, calibrating and correcting certain effects. That covers approximately half of the work that was put into each scene.

PASCAL: I did some work with Adobe Photoshop CC. Its masking and blending capability makes it a really awesome tool for texturing. Some of the textures are from www.poliigon.com by Andrew Price. To help with the base lighting I mostly used Andrew Price's Pro-Lighting Tool and HDRI from HDRI Haven by Greg Zaal. Blender Filmic, was also a part of the show. I used Adobe Illustrator to design some mechanical props and the wall ornaments you'll see in the final scene of the movie. 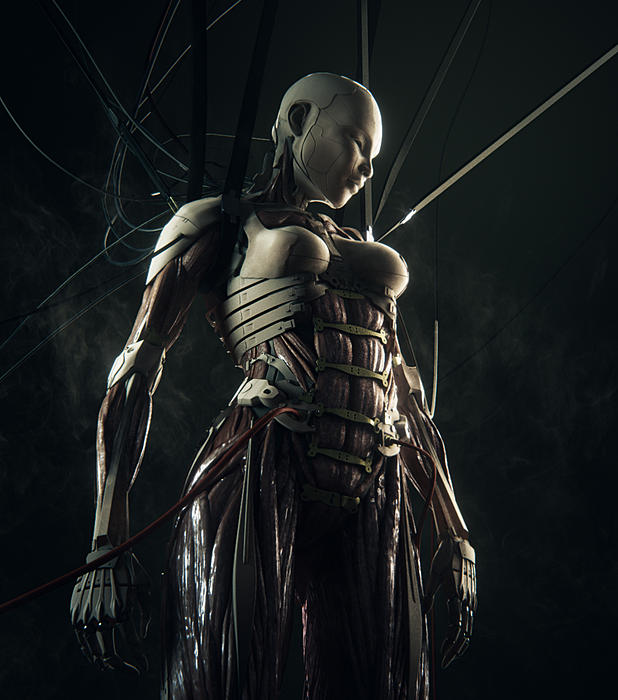 It looks like you pushed Blender really far. What were some of the challenges/limitations you had to deal with?

LEZLY: Nothing in this project was easy, even the parts that seem basic. Blender still needs to grow a lot in terms of VFX and that made every scene a real challenge. The fluid simulations are good examples of the difficulties as was the rendering, since we didn’t have many computers at our disposal.

I could almost hear Lezly tearing his hair out.

As you can imagine, a lot of work after denoising was required to reach the level of quality you could see in our short movie. Unfortunately, we couldn't use Blender denoising as it's not yet been intergrated into Blender. After Effect was the solution.

PASCAL: I could almost hear Lezly tearing his hair out and shouting big words while creating the fluids and hair simulations!

Designing all the environments and props also brought its challenges. For instance, many details disappeared in the darker parts of the scenes and spending too much time on them would negatively affect the project timeline.

Another major thing was the polycount. In order to render the scenes, I kept it as low as possible but at the same time I wanted to make the scenes look highpoly. It is actually not that hard to do if you know your way around modeling.

I always wondered how hard it is to animate. Well, now I know.

Lezly, you took on the animation part without any previous experience. What was that like?

LEZLY: Animation was the hardest part as far as I am concerned. I often wondered how hard it is to create quality animations and believe me, I really got to experience that during this project.

The bedroom animations were definitely the hardest to produce. It took me approximately two weeks work for each one. To perform the work, I had to learn the basic principles of animation from tutorials, movies or by asking other animators.

Those animations are not perfect but I really gave it my all and I do not regret anything and feel much more confident about animation today.

Hats off the the team of three for their incredible achievement! Follow Pascal and Lezly on Artstation and check out Max's portfolio.