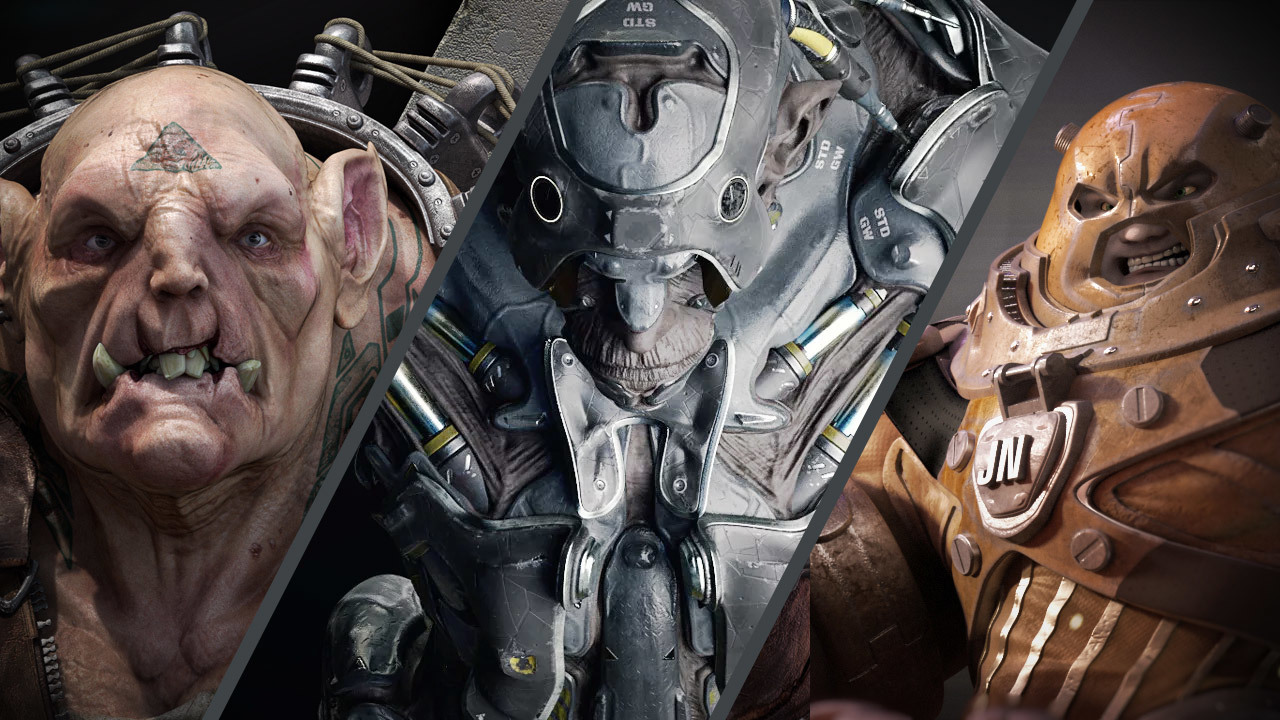 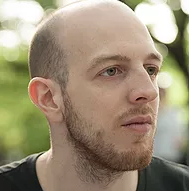 Max is a talented digital artist and Blender user with an impressive professional career. As a Blender user, he's proof that our favorite open-source app is a viable tool for professionals. If you've spent any time poking around the Blender community you will likely recognize his work. Max was gracious enough to answer some questions and share his insight about working as a Blender pro.

Max, we are curious about how Blender fits into your professional experience. How do you find Blender functions alongside other 3D software in a pipeline?

Since 2.48 I started to add Blender into my personal pipeline - at least for UVs and retopology, and since 2.62 (read n-gon support) Blender is the only tool I use for making assets. That means that I do 90% - 100% of the job in Blender. From time to time I also jump into zBrush for certain tasks.

About zBrush, I think it is better for concept art and 3D printing than for making production assets. I can survive without it - actually, sculpting in Blender is not bad at all. You must know how to use it and understand that nowadays a lot of micro details could be added during the texturing phase thanks to software like Substance Painter or even Blender. In fact, the Substance Suite became a very important addition to my pipeline.

After the asset is done, I put it into Maya/3ds Max to apply the shaders. As a modeler, most of the time I use OBJ to export the assets from Blender to other software.

Even if OBJ is an old format, it's worth cleaning up the data. In fact, it resets the rotation, scale, and position to 0,0,0. It deletes all vertex information and additional unused UVs, vertex groups, etc. but it also keeps vertex normal information, materials and vertex order. Of course FBX is way better when I also need to export vertex weights, bones, etc.

How do your non-Blender colleagues react to you using Blender?

Other people are fascinated by watching what Blender can do, also because I often problem-solve with it. I come from years of 3ds Max and XSI and I also know Maya pretty well, so I know the weak points of all the mainstream software. When people ask me why I use Blender I often say that I use it because it's powerful, not because it’s free.

I read that you worked on a certain beloved Nintendo fighting game franchise. As big fans of that franchise, we have to ask, which game specifically did you work on? What did you build for it? Did you use Blender on any of it?

Yes, I worked on the cinematics and the posters for the fourth game in that franchise. I was lucky enough to work on specific yellow and fire-tailed pocketable monsters as well as the silent hero from another beloved Nintendo franchise. All the character were made entirely in Blender, even the texture painting and shape keys. After that, they were exported into Maya and rendered in Vray.

As for games, Dark Souls 3 was the most formative experience. In fact, I worked at FromSoftware for a year with a great team and we built up the game in a really short amount of time, considering that the pre-production was longer than the production itself.

I had the luck to work on a lot of characters, using Blender even though the pipeline was 3ds Max. When you have to work on characters that have a lot of props and parts, you need to pick your software and develop most of your character inside it, because importing and exporting all the parts for every retake is a waste of time.

I know the frustration of polymodeling in Maya or 3Dsmax so I know why most people jump on zBrush as soon as possible. I prefer Blender, for a number of reasons. I’m not saying that zBrush is bad, but when you work with physical cameras, you can mimic the in-game camera and you have all the features of a normal 3d package: groups, parenting, bones, instances, and modifiers. Everything is combined with sculpting tools...and it's really easy to not leave Blender.

Also, the files are so light compared to other software, you can save tons of different copy without filling up the HDD space.

I think the most underestimated feature in Blender is the ability to modify geometry without the gizmo, combined with the precision of numeric input, the orthographic view (that is broken or fake in most software) and the interactive falloff.

I’m working on other titles as well, with Konami and other big companies as outsource, but I still can’t say anything due to NDA...stay tuned!

It looks like mechanical design is one of your strong suits. How do you decide what kinds of details to add and where to put them? Have you studied mechanical engineering, or do you mostly pick up the functional design elements from references?

I studied industrial design at university and art at high school. When starting a personal project, I usually pick references and put them all on PureRef and mix them with my personal style, or whatever I think fits the best.

When possible, I prefer to have 2d sketches because I get a fast representation of what I want with a certain level of detail. This helps me to get out the comfort zone of 3d modeling and forces me to experiment more.

For mechanical parts I try to look at the references, especially if I need to use a functional element that may affect the rig too, like a fork or a mechanical joint. But I also like to give myself some freedom on shapes, because the cool part of 3D for games and VFX is that it's possible to make the impossible, right? 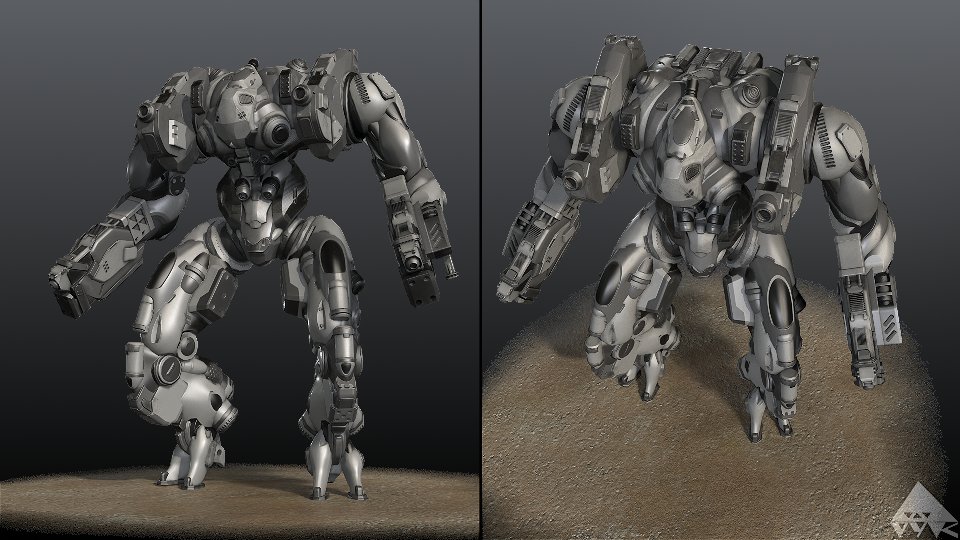 Where are you from originally?

I’m Italian, from Milan. I left Italy and my job in architecture and design in 2006 when I was 23 to come to Tokyo and start working in the CG industry.

What is one thing you've learned in life that you wish you would have known at a younger age?

English! If I could go back in time I would definitely spend a few years in the USA or UK and master it (before moving to Japan of course!)

Do you find it a struggle with the work/life balance as an artist?

I don’t really feel a work/life separation. I think I’m lucky enough to do what my passion is. Of course, there were a few moments in my career that I was wondering if all the effort and time I put into my art was worth it, but I really think that passion is the ingredient that keeps me on track even when I have to work long hours.

After starting my own company around 2 years ago, studioGUFFAW, I have more control of my time.

How much time, if any, do you spend on 3D projects outside of work?

Until a couple of years ago, a lot. Nowadays I can work on personal projects at work too, so at home I focus on studying new techniques more than working on art pieces. Like picking up Substance or zBrush and playing around to see if I find something new to learn.

What was your very first CG-related job that got you into the gaming industry, and was it different than what you had expected?

I worked for a “small” company of 20 people here in Tokyo where I was a total generalist. Then I moved to Digital Frontier, a big company here in Japan and I started to work on big projects, mostly for the internal market, like ‘Resident Evil Damnation’ ‘Gantz:O’ ‘Smash Brothers’ etc. While working in those companies I also helped out a small indie team, OYK games, to develop a couple of games for the mobile market during my free time, which was an experience that got me thinking about games.

So when I left Digital Frontier to join FromSoftware, 3 years later, I was amazed by how many polygons and the quality you can push in AAA games nowadays. I learned a lot about real-time modeling, shading, PBR, etc. I think having skills in both of the disciplines is fundamental and I also think that Blender is unbeatable in this field. It has awesome handy tools already, I can’t really imagine to work without it. Really looking forward the 2.8 release. 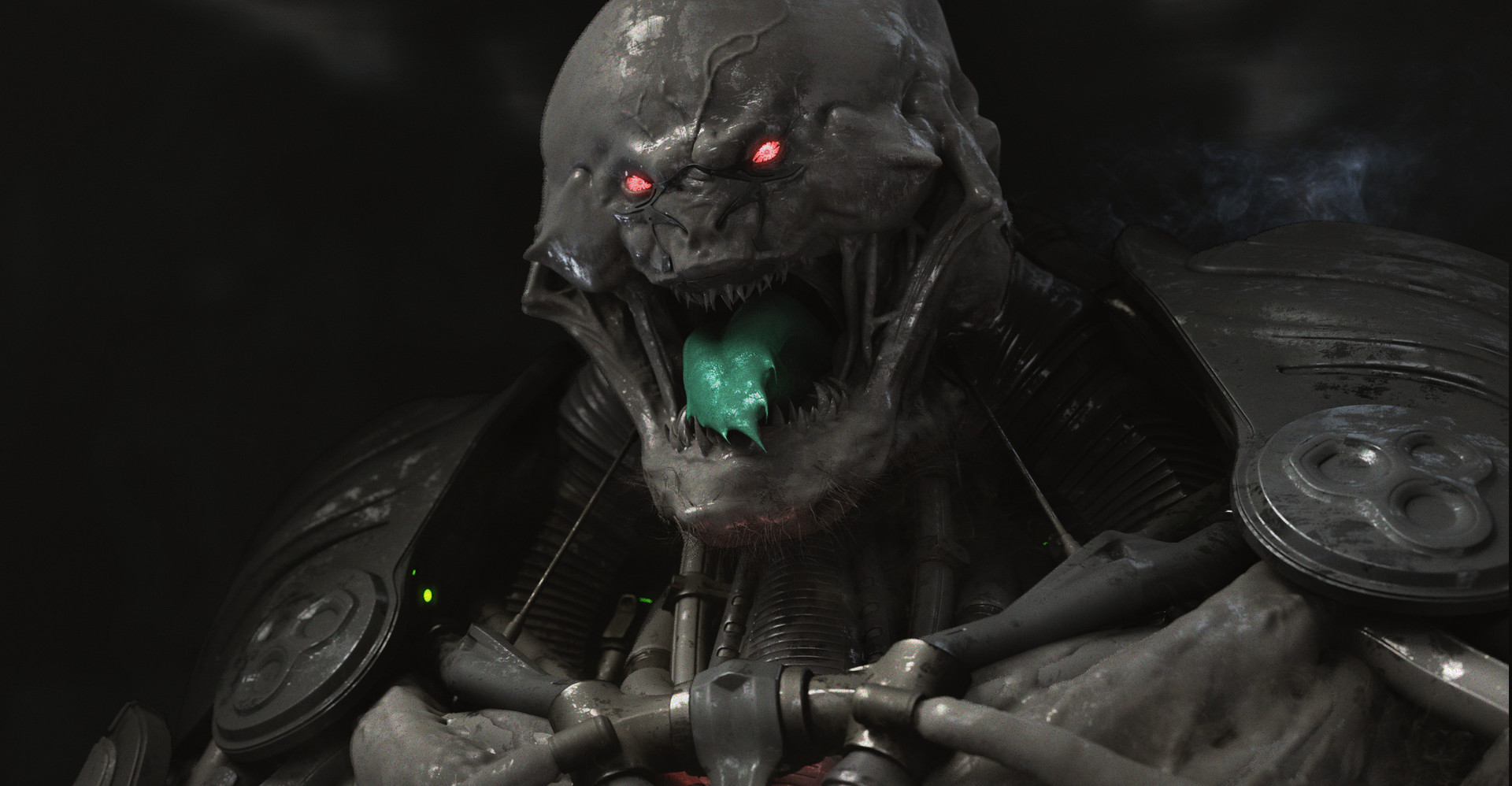 What hobbies or experiences from outside the CG world have influenced your work the most?

Moving from Italy to Japan has forced me to see things in a different way and I think this is the most formative thing that can happen to you: The understanding that the idea of ‘normal’ or ‘common’ is totally relative.

I used to do legal graffiti (the last art movement in my opinion) when I was younger. I was always fascinated by architecture and product design. Being constrained by art had a real impact on me, and I never liked the total freedom of contemporary art.

I love classic art for the same reason. My favorite painter is Caravaggio, who is very technical and eclectic. Another artist, probably one of the few contemporary artist that I like, is Scanavino.

The last thing is Japanese culture, lifestyle and anime/manga - "Evangelion", "Ghost in The Shell" and "Appleseed". "Akira" in particular has also had a huge impact on me. I still watch it sometimes.