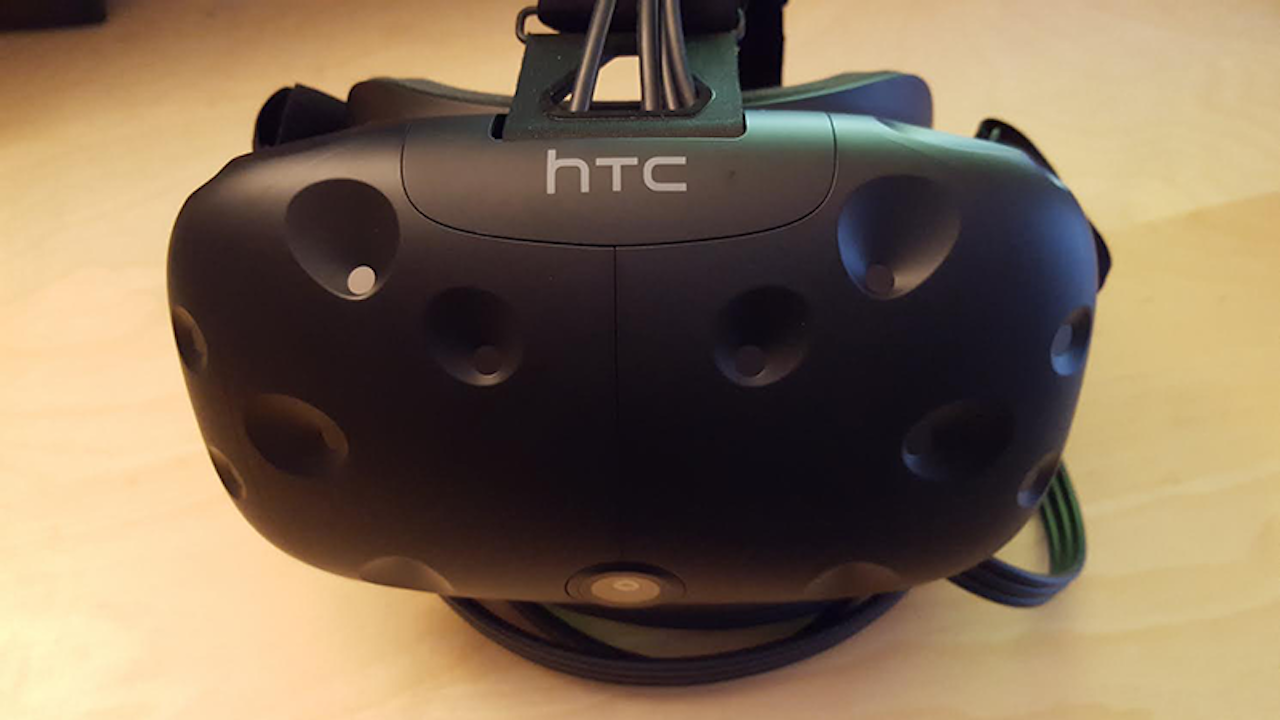 The HTC Vive virtual reality headset is now in the hands of consumers, including mine. And while many are still awaiting their orders, I've already spent enough time with my Vive to summarize the experience with one word: "Wow!" While I’m no stranger to VR (virtual reality), having both am Oculus Rift Developer Kit 2 (DK2) and Gear VR, the immersive feel of the Vive leaves me amazed. I won’t go into the details regarding the specs or setup process of the Vive in this article. Rather, I want to share my experience with those who have yet to fully believe in the “VR fad”, as many discount it to, or for those who have experience with the Rift or Gear VR and are wondering if the Vive is worth it. 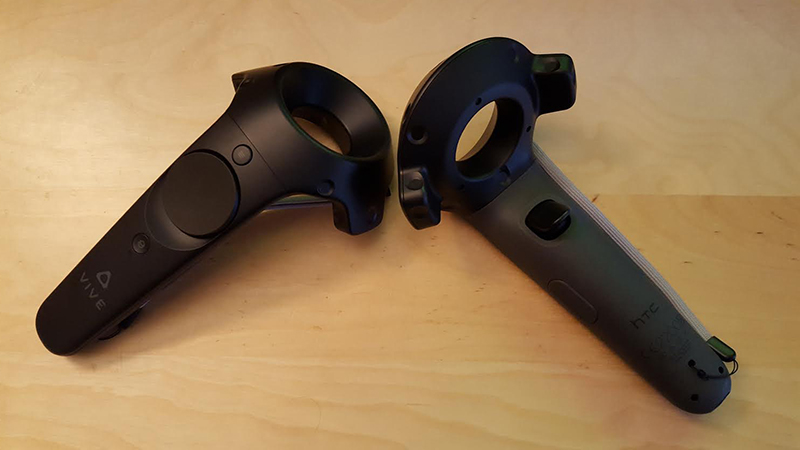 The wireless controllers contain an assortment of inputs

"Immersive" is the best word I can pinpoint to describe what the Vive is to VR. Inevitably, everyone who tries a VR headset will try to reach out and touch things. It's instinctive for us to feel as though we’re really in the game and try to grab a bottle or slap something off a table. It’s this instinct that makes the Vive so unique. I will preface what I’ll say next by admitting that I had a hard time getting my Vive setup, which is not typical. It took me nearly two days to get things fully working. However, I was having some hardware issues that slowed the setup process, so it's safe to say it wasn't a fault of the Vive alone. Once you do get your Vive setup (hopefully, faster than I did) you start off in a simplistic scene with a universe-like skybox all around you after enabling Steam VR. It’s quite surreal and something that will truly impact you especially if you’re new to VR in general. The added benefit is that you can walk around, wave your hands and see the lighthouse tracking do it’s work.About the lighthouse tracking: it's smooth. Very smooth, in fact. And that's only with one lighthouse in use, which didn’t deter me from playing games for hours. At that point, I was in the process of setting up my lighthouses for optimal height and distance before I make a more permanent fixture on my walls. Now with two lighthouse sensors setup, the tracking is incredibly accurate even as you turn, duck and flail your arms about. 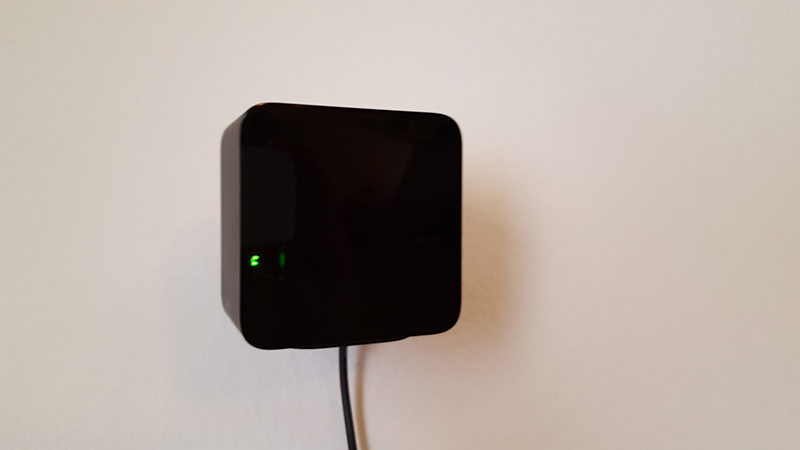 The Vive makes it easy to jump into a virtual Steam UI system to start playing games. It’s clean and easy to use with little to no prior knowledge of how it all works. A laser light effect emits from your floating wireless controller models which allow you to select various UI elements like playing a game, opening a browser or adjusting settings. You get tactile feedback from the controllers which feels natural.I started with the Valve demo which is quite fun, though basic at best. Afterward, I decided to try out the famous VR game “The Lab” which is a collection of various mini games that Valve created to showcase the Vive’s mechanics. This is by far my favorite of all the series of games and tech demos I’ve tried.

The first of the mini games I tried involves visiting a photorealistic mountain and teleporting down the slope to play catch with a robotic dog by throwing sticks. It's a nice view but not much fun.

Next, I began the “Longbow” mini game which I believe will be a crowd favorite. In this simplistic game, you’ll play as an archer who must fight off the hoard of enemy characters looking to storm your castle. The main mechanic of this game revolves around holding a bow with your right hand and using your left controller to place the arrow for pull-back and release. The most impressive aspect of this is the incredibly realistic pulling motion.

The "Longbow" mini game from Valve's "The Lab"

The controller itself vibrates slightly and provides sound effects, feeling as though you’re sensing tension in the bow. It’s a very rewarding exercise to pull back the arrow and see it catapulted at the intended target. Aiming in this natural way means you have the controllers up close by your face. On more than one occasion, I even squinted as if that would help with my aim! When your arrows hit your enemies, they explode into cubes and balloons, all of which you can also shoot down for extra points. Shooting arrows at armored enemies results in their helmets flying off. Even my wife, who typically feels dizzy and nauseous from VR headsets, loves this game and feels no discomfort. That's a big plus towards making VR mainstream.

Not Just for Gaming

"The Lab" includes several fun mini-games of this sort and I recommend starting off there if you get a Vive. Another impressive app I tried with the Vive isn’t a game at all. It's called Tilt Brush. You may have seen Tilt Brush demonstrated by professional artists from Disney. It's a 3D-painting app which can only really work this well in VR with controllers. Even though my Tilt Brush creations are reminiscent of a 5-year-old’s doodles, I’m having a great time just waving my controllers in the air to paint in all three-dimensional axes.

Painting a ring of glowing fire around you, creating a 3D wireframe of a character, or just going crazy and recreating a Jackson Pollock painting with depth - it's so much fun!Tilt Brush is only one example of how the Vive can be used for more than just gaming. I expect to see many more applications for the Vive and VR in general: Training simulations like surgery, re-creations of historical events or travel, along with the plethora of situations that can benefit from an affordable yet immersive experience in the comfort of your home.

One facet of VR that many people will probably overlook, as I initially did myself, is just how physical the experience becomes. Pulling on virtual arrows for a few rounds made me realize just how taxing this type of VR can be on the body. Often, it felt like I was pulling back actual arrows as my arms started to feel tired. There are reports of people feeling sore after playing Hover Junkers for an hour or two. It's a VR first-person-shooter-style game that requires ducking behind virtual cover and shooting back at other players. You have to remember that the Vive utilizes real-world room space, which means you're walking and standing a lot while waving your arms around to accomplish various in-game tasks. In the demo version of Budget Cuts, I was often peeking around corners, ducking, and even getting down on my hands and knees trying to look through a ceiling tile to shoot at a robot. Soon enough I'll need a VR cover to help with the sweatiness that comes from having a headset strapped to my face!The physicality of VR may be a selling point for those looking to make their gaming sessions a bit more interesting and even healthier than sitting at a desk. I imagine fitness-based applications having a field-day with VR. Who wouldn't want to do yoga on the surface of the moon or atop the Great Pyramid without having to leave their living room? I’m sure we’ll see such applications pop up soon enough! Personally, I'm looking forward to fighting in a virtual boxing ring and playing other virtual sports so I can benefit from the real-world movements that such games would require. It might be a long way off, but I sure can't wait! 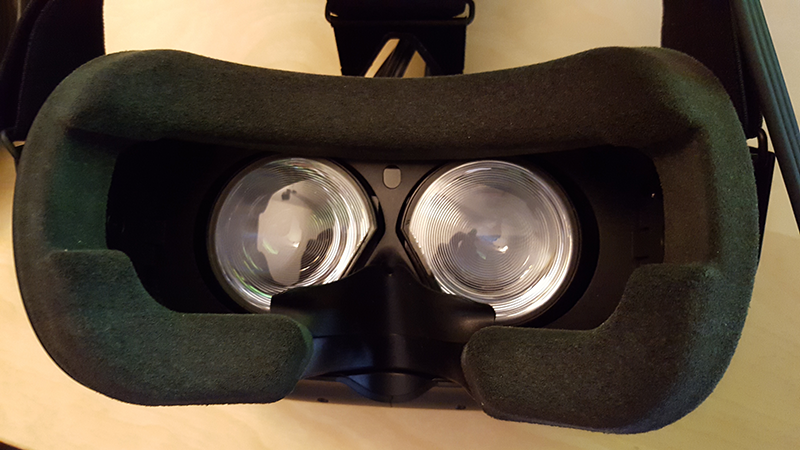 This is year one of virtual reality and the Vive has set the bar high. For anyone on the fence about buying the Vive: it’s time to take the jump because THIS is what a VR experience should be like! For those of you looking to learn how to build amazing VR experiences using Unity, hang tight - I've got a VR Fundamentals course in the works. For now, I'm back to shooting virtual arrows!

Check out Jonathan's review of the Samsung Gear VR or GO BACK TO CG Cookie to KEEP LEARNING.