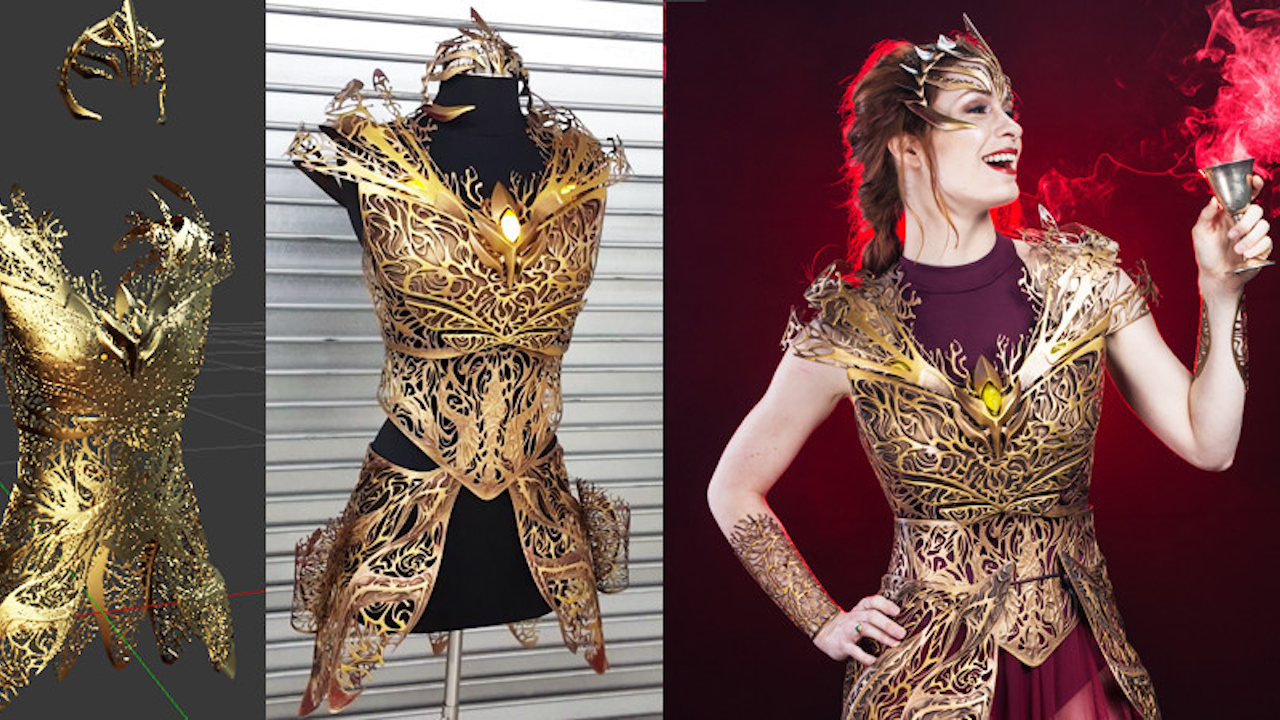 The first time Melissa 3D-printed a facial mask of her own design, she had no idea that it’s going to win her an award in an Adobe/Shapeways competition. After all, she had only been learning 3D printing for a few months, had little experience in modeling and had never received formal art education.

Her training came from many sleepless nights pouring through YouTube and CG Cookie tutorials and asking herself, what is it that I want to create?

The idea of a masks may have sprung from her past experience; as she admits, there were times in her life when she wore a metaphorical mask, practice her art in secret, sketching for hours hidden away from disapproving voices who urged her to focus on “a real career”.

Today, when she’s not working on the beautifully intricate (and fully wearable!) Dreamer Masks on her site Lumecluster, she is juggling her two other businesses or typing away at the next post for her blog which is gaining a growing following. “I am definitely never bored,” Melissa says happily.

Melissa, how did you end up creating in 3D?

First of all, I don't have any kind of art, design or architecture degree or background. I'm just someone who happens to really enjoy doing art whenever I get the chance. In fact, I generally wasn't allowed to do art most of my life or I ended up creating art in secret since many people in my life weren't very supportive of the idea of being an artist.

"I gave myself an ultimatum: make an interesting 3D print within 3 months, or give up."

Despite all that, I always found joy in creating art. Over the years, whenever I had free time to experiment, I played with various kinds mediums like acrylics, watercolors, markers, charcoal, digital painting, ink drawing, sculpting, leather working, paper cutting, and laser cutting, etc.

By October 2013, I figured I'd give 3D printing a shot on my off hours from managing my other company. It was one of those things I was curious about but was too scared to approach...but nothing else was catching my interest, so I thought I'd try it out.

I gave myself an ultimatum. If I didn't make anything interesting within 3 months, I'd drop 3D printing and move on. So, I spent days figuring out what I actually really wanted to create. And then I realized I have always loved masks.

And so, I went through a lot of sleepless nights and poured through countless Youtube videos and CG Cookie tutorials to figure out what I would need to learn to accomplish my goal--to create an intricate mask. It was difficult but I was having fun learning.

When I 3D printed my first mask in January 2014, it also turned out being the mask that won me the Adobe/Shapeways competition. After that, I decided 3D modeling and 3D printing was worth a deeper dive and have since also designed the aesthetics on a gorgeous 3D printed prosthetic leg and worked on a JiHAE music video starring The Walking Dead’s Norman Reedus.

"The first time I opened Blender, I was seriously intimidated."

What are some of the differences between 2D and 3D art that you had to get used to after you switched?

In 2D all I had to worry about was grabbing my trusty pen. In the beginning, I thought, "Meh, I learned how to use Photoshop so maybe I can learn Blender on my own as well!" Haha.

I was quickly intimidated when I first opened up Blender. I had to keep myself from freaking out at the interface! When I started the intro tutorials on the user interface, I was really worried I wouldn't remember all the hotkeys. It took a lot of practice but I'm finally getting a pretty good hang of it now.

"I wanted to be a part of Blender’s supportive and creative community."

Why and how did you choose Blender as your main tool?

I picked Blender because it looked like the best program to make the intricate models I envisioned, which are my Dreamer Masks. It also looked like a program I could grow with.

I also noticed Blender had a pretty supportive and creative community and I wanted to be part of that.

What do you find to be the biggest limitations in Blender for your day-to-day work?

Hard for me to say right now because I'm sure I still only know a fraction of Blender's capabilities.

I do mostly modeling and some sculpting in Blender but I've been pretty much okay so far. I'd say my biggest limitation was more about me developing a familiarity with the program since I was often learning on-the-go for several projects (which was also the case for the Dreamer Regalia project).

The armor you created for Felicia Day is incredibly intricate. What tools in Blender did you use to create such a complex piece and were there any workflows you employed to ease or automate the process in any way? Or was it simply a lot of manual poly modeling?

I relied pretty heavily on the shrinkwrap modifier. When I was just starting out in Blender, I think my “a-ha!” moment for figuring out what tools I needed to use to create my masks was the Introduction to Hard Surface Modeling.

"If anyone has a better idea for creating intricate designs, I’m all ears!"

If you watch my timelapsesf, you'll noticed that the majority of what I'm doing is shrinkwrapping my designs along previously modeled surfaces. The entire armor pattern is asymmetrical, so I couldn't use any mirror modifier or anything. I pretty much extruded and shrinkwrapped my pattern.

[embed]https://www.youtube.com/watch?v=ZlWMpwIQ2mw[/embed] I also had to measure every single face I was laying down. So, I had the "Length" edge info turned on at all times. I was pushing my model details pretty thin, so I had to make sure everything I made was going to pass the 3D printing thickness checks. You can see all that in my timelapse videos as well. Once I was done with that, I applied a solidify and subdivision surface modifier.

If someone has a better idea, I'm all ears and always willing to learn better methods.

"3D printing has given me a new direction."

How has the onset of accessible 3D printing impacted your work? Has it changed the way you approach your designs and workflow in Blender?

Well, I always loved masks but didn't really have a way to create the intricate masks I envisioned. I tried leatherworking but I really hated it.

But when I started getting deeper and deeper into 3D printing, I realized I could push myself to make bolder structures and patterns. Drawing on paper or digitally painting became boring for me but 3D printing gave me new ambitions.

If you look at my old artwork, you can see that a lot of my 2D work has translated into my 3D work. I struggled for a bit trying to figure out my workflow. Nowadays, I tend to sketch the overall shapes of what I want to model, hand draw my patterns separately, and then build upon my models from there.