This February, CG Cookie ambassador Charlie Williams made his way to Marwen, a nonprofit organization dedicated to providing free visual art courses and college planning to under-served young people living in Chicago. One of the courses Marwen offers this winter term is In 3000: Virtual Modeling for Video Games, an introduction to 3D modeling using Blender. Presenting as a guest speaker for the course, Charlie’s job was to demonstrate the power of Blender to a group of high school students between ages 14 and 17. For eight weeks, this group gives up a Saturday morning in bed and gets together to learn Blender. Talk about commitment! [caption id="attachment_128173" align="aligncenter" width="700"] 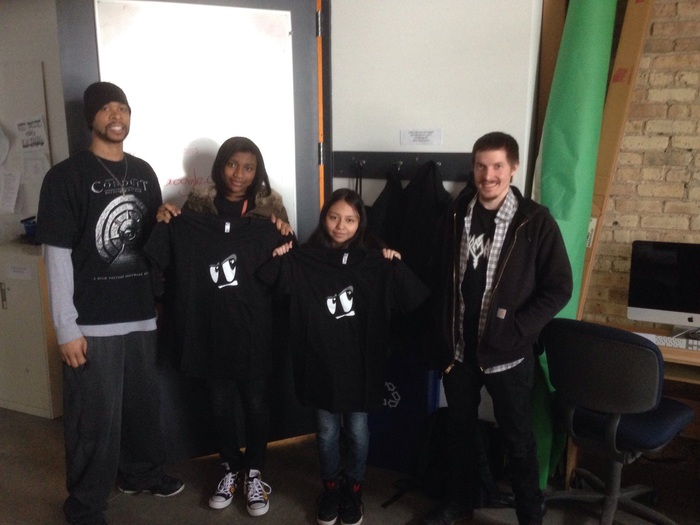 Roosevelt Pittman (left) with two of his students and assistant teaching artist, Nic Meier (right) at Marwen.[/caption]   Blender was a natural choice for the course instructor, Roosevelt Pittman, a professional environment artist at High Voltage software and a friend of Charlie’s. “As the majority of our students are from low-income families, Blender was the best solution for us, being an open-source free program,” Roosevelt explains. “Even though many of the students have never worked in 3D before, they are picking up the program really well!” The goal of the course is to create a complete character from their own original concept and model sheets. These are used as reference for a 3D model which is being created in Blender. Charlie was incredibly impressed: “These are first-time Blender users, but their character models have a great artistic merit. I loved that they are tackling the challenge head-on and having fun along the way.” [caption id="attachment_128377" align="aligncenter" width="1024"]

In Roosevelt's class, students work on their 3D character models every Saturday morning.[/caption]   After presenting the students with CG Cookie t-shirts, Charlie talked to the group about Blender and showed them some of what the program can do. “Since this was the group’s first interaction with the program, I wanted to open their eyes to the world of VFX and animation,” explains Charlie who has been making rounds at schools and libraries in the Chicago area. “Sintel, the feature length Blender animation was a big hit with the students, in fact, some of them had seen it before,” says Charlie who hopes that the group will be inspired to continue using Blender after their course is over. Roosevelt seconds this, stating that some students have already downloaded Blender on their personal computers and use it outside the course as well: “The students agreed that they would like to do more classes in the future and I am confident that they will achieve great things!” CG Cookie community ambassadors periodically visit schools and libraries in Chicago area, delivering presentations and free workshops about digital art. Do you know of an institution that would like to have us? Let us know in the comments!