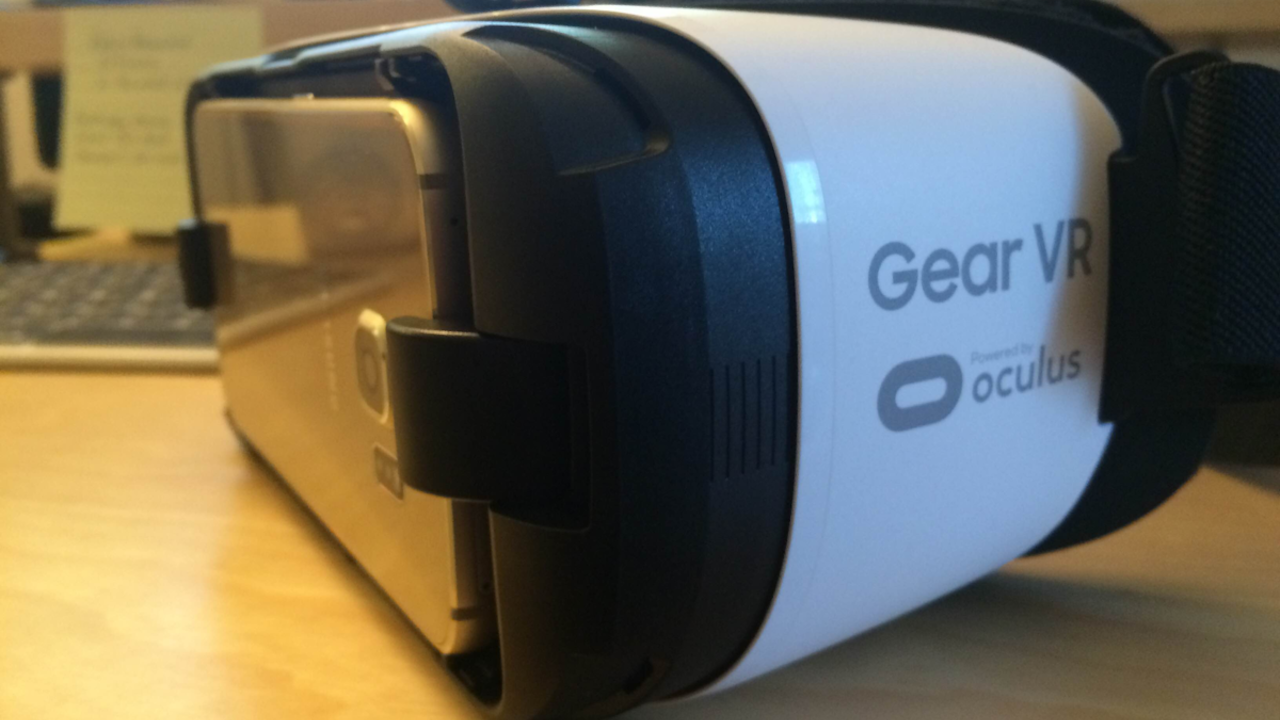 The Samsung Gear VR is now out for consumers to use with their Samsung 6 series phones. The product’s promise is to “transform your Galaxy phone into an amazing portable virtual reality system”. It’s become a hot tech toy and sold out within days of being sold online. At $99, is it worth it? As a developer who owns another Oculus VR system (the Oculus Rift DK2), the Gear VR is quickly becoming my favorite VR platform thus far. Here is why.

The Gear VR’s ease of use is its biggest allure. Simply snap in a compatible Samsung Phone (I’m using a Samsung Galaxy S6 Edge) and strap on your headset. Done!  You’ll be presented with  the Gear VR “platform”, similar to starting up a console. Right from the start you’ll find yourself (along with the panels and menus) in a virtual world. Look around you: the menu system stays in place while you check out the environment. 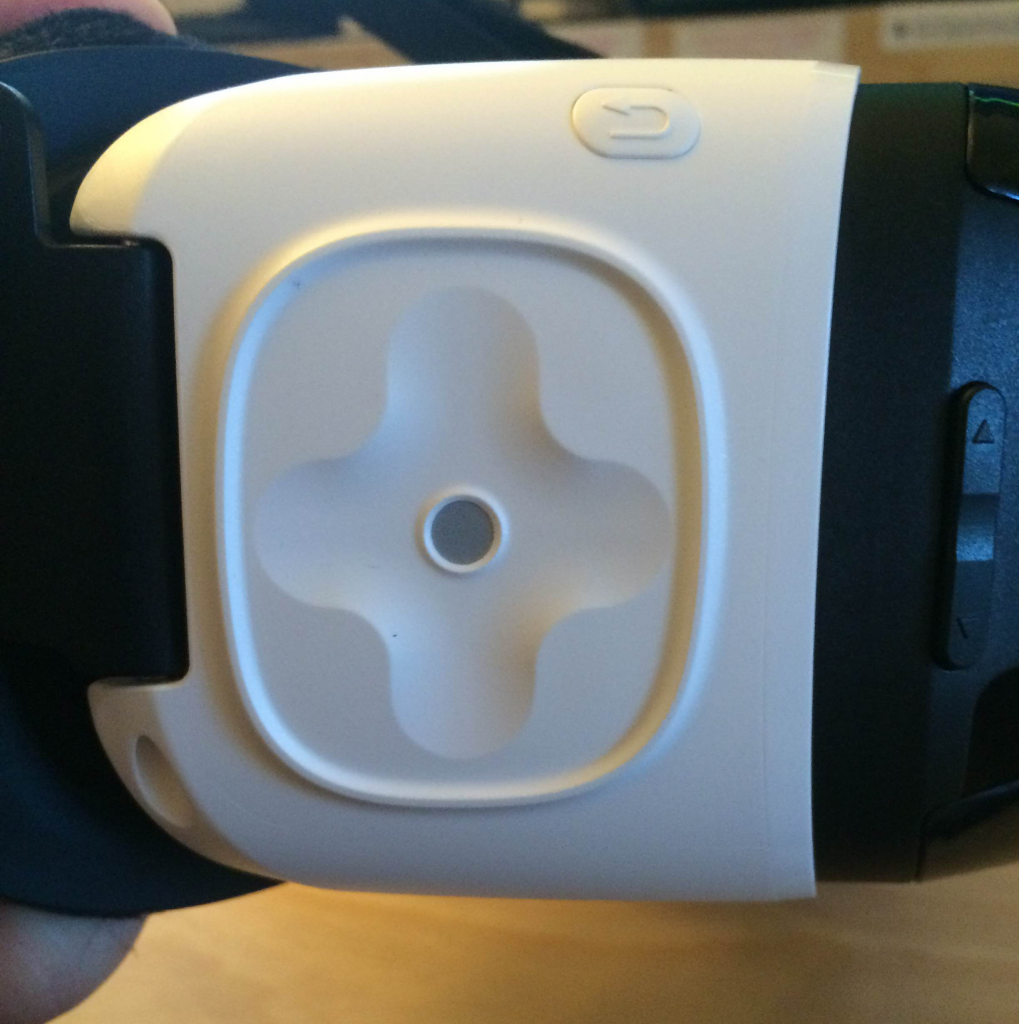 Touchpad with back button and volume buttons

Even though I had no prior experience, I found it easy to navigate through the various VR menu systems. The touchpad on the right side controls scrolling, along with light taps for confirmation. Click the back button to return. You’ll have a scroll wheel in the center to move the phone in or out to adjust the view, along with two volume buttons. After having used the DK2 which was often a hassle to setup, the Gear VR was a breeze in comparison!

The Gear VR owes its screen quality to the AMOLED screen found on the compatible Samsung phones and I was amazed at the clarity of everything from videos to games to VR images. In comparison, the DK2 often shows a prominent “screen door” effect which can break the illusion.

The “cinema” based apps on the Gear VR are especially impressive; they allow you to view movies and videos as if you were in an actual theater. My favorite was the “Ant Theater” where you watch a movie on a giant Samsung Phone placed in the grass surrounded by large mushrooms and twigs. On more than one occasion I kept thinking how clear and clean everything looked. The screen works perfectly for this setup. 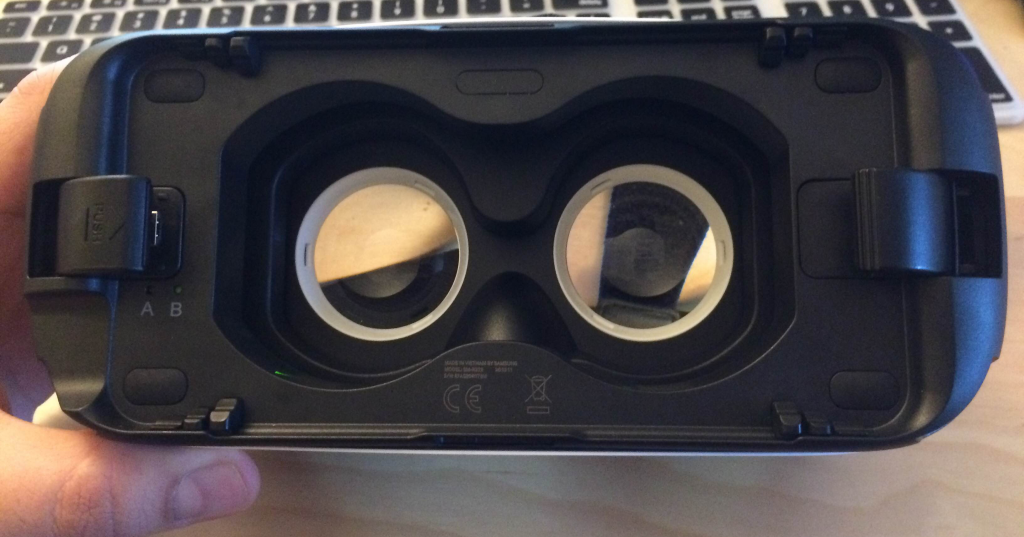 Outer view with adjustable snaps that keep the phone in place

Portability and Comfort of Use

A big bonus of the Gear VR is its incredible portability, enhanced by its light and remarkably comfortable headset. To be fair, I will say that the Oculus Rift DK2 can pump out more impressive visuals; however, it also requires a beefy computer. Some have said that their Samsung phone can get hot while using the Gear VR; I have never experienced this. As an added bonus, the lenses are easy to clean and crystal clear.

A Bonus for Gamers

On the gaming front, you’ll notice that most (though not all) Gear VR games require a bluetooth controller. This is an added expense but in return, you get a fun, portable gaming platform unlike anything out there. The  bluetooth controller gives you a truly wireless experience and is far more enjoyable than trying to use the touch controls on either side of the headset, especially if you are accustomed to using a controller on a console. (More info on compatible Bluetooth controllers here.)

It's All Fun and Games

I’ve yet to try out all the games on the Gear VR but I did have a great time playing Omega Agent, which requires a bluetooth controller. I was also able to try out a few games that don’t require a controller, like the ever popular Temple Run which is free to try out and uses simple swipe and tap gestures on the touchpad. https://youtu.be/92vpiCC9XCs

With that said, these games do take some time to get used to. When you select a game to try out you’ll see a note about how comfortable the game is such as “Comfortable for Most” or “Comfortable for Some”. VR has a tendency to make people queasy with fast movements and some games make this worse, especially if they require jarring stops. However, there is also a plenty of 'standard' games with typical game mechanics with VR capabilities. Overall, the quality of the games through the Gear VR store is higher than what you might expect on a typical Android app store - and with good reason. While this approach might create a “walled garden” for gaming, it also ensures a better experience overall. 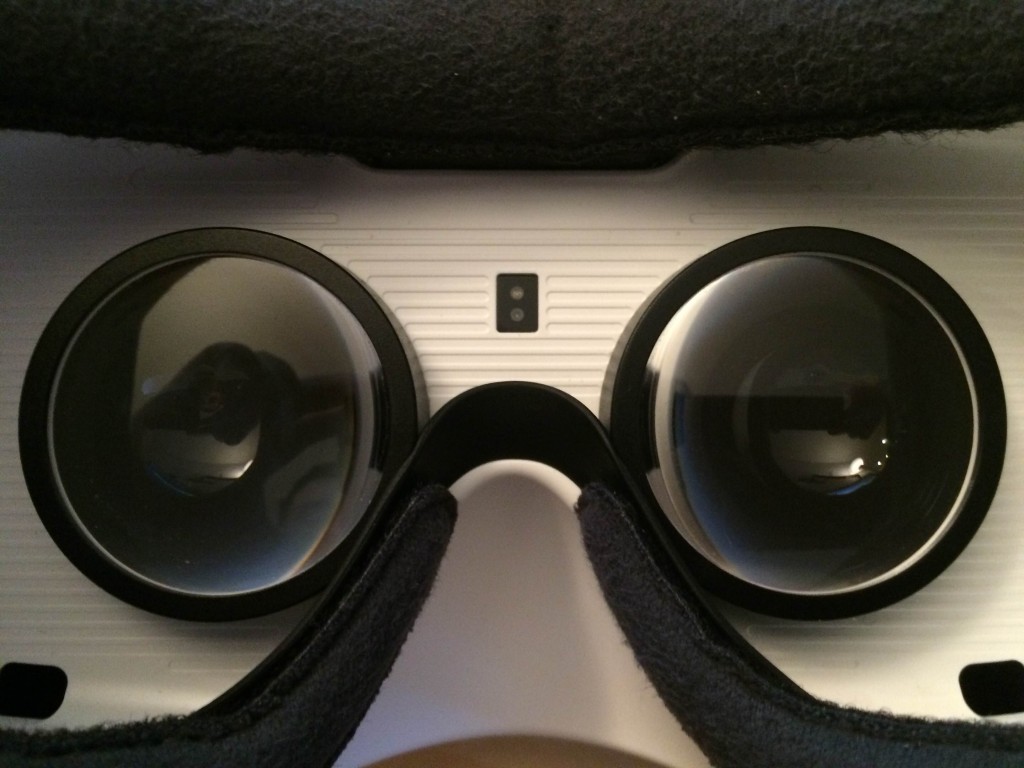 The bottom line is this: the Gear VR is a must for anyone interested in getting into VR. If you have a compatible phone, it’s well worth it for gaming, movies or images. So how does it compare to Google Cardboard? The Gear VR is a clear winner. You see, it includes not only a more comfortable experience, but also comes with head straps, sensors, volume controls and a built in touchpad - along with support for Bluetooth controllers. Plug in your phone and you get unique experience solely made the Gear VR. In contrast, none of the above is included in Google Cardboard, which makes their prices comparable at the end of the day.

A New Age for VR

The Gear VR is  one of the first consumer-ready VR products it’s off to a great start. With the consumer versions of both the Oculus Rift and Valve’s Vive still a bit off in 2016, this is your chance to experience some great VR content.  At the very least, head over to your local T-Mobile or AT&T store to see if you can try it out. And tell them I sent you!

Have you tried the Gear VR yet or planning on it? Tell us in the comments...and stay tuned for next week's post where Jonathan Gonzalez will share how to use the Gear VR to play your very own Unity games.